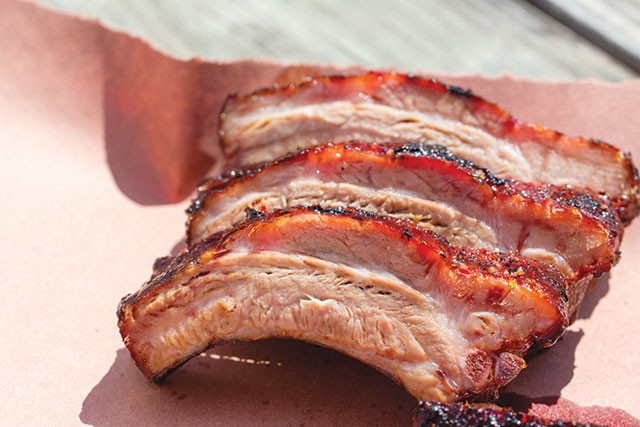 What’s old is new again inside Southtown’s B&D Icehouse. After former owner Bruno D’Zanski shut down operations of the neighborhood hang in 2010, after more then 50 years, friend and businessman Steve Newman reimagined a new life for the space across the street from The Friendly Spot. And with modern, Asian, American, Mexican and heck, even Belgian eats already in place in Southtown, there was a glaring omission—barbecue. Enter the Two Bros themselves as Jake and Jason Dady teamed up with the Newmans to reinvent B & D.

Outwardly, the bar retains it’s puro charm as no major changes were made to its interior or exteriors (yes, the mural remains untouched), but the menu now overflows with Two Bros favorites like the salt and pepper brisket, smoked turkey and chicken thighs, along with badass homemade sides. The creamy coleslaw will satisfy, but the green chile mac ‘n’ cheese will have you going back for seconds.

Moreover, you’ll find chopped beef Frito pie, chips and a dreamy chipotle dip, bacon-wrapped jalapeño poppers and a saucy Mexican shrimp cocktail under snacks, plus hot and cold sammies Guy Fieri would lose his highlights over. The Southtown Slammer combines sausage, potato chips and jalapeño poppers because why not. There’s also an ode to D’Zanski with the “Bruno,” a mountainous sandwich with chopped beef, that mac ‘n’ cheese, coleslaw and Shiner sauce.

Bring the heartburn meds and remember—once they’re out, you’re S.O.L., so get there early to chow down.