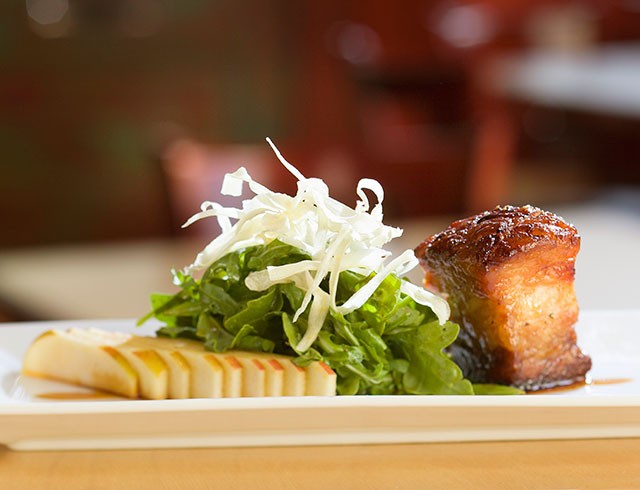 Big things have small beginnings. Henry Leman’s small beginning came in the form of a coffee truck known as Beat Street Coffee Co., where for just over a year he poured some of the city’s best java. Leman and wife Terri took a chance this March when they decided to move into the former Justin’s Ice Cream on Main.

The concept for Beat Street varies. Stop in before 11 a.m. and you’ll find fresh quick breads, muffins and great coffee (Leman worked with roasters in Texas and Oklahoma to achieve the unique blend); the lunchtime crowd is made up of ladies who lunch, power suits having power meals and anyone looking for a solid bite to eat that doesn’t put a dent in their wallet; come dinnertime, Beat Street takes on a more intimate boutique-y setting that goes well with the playful dishes being prepared in the kitchen.

The varying set-up is purposeful—Beat Street is a triple threat. The Lemans run the coffee shop; 24-year-old Nate Clark mans a simple, but elevated lunch; and 46-year-old San Antonio native Jeff Wiley caps off the night with beautifully executed dishes with the help of sous chef John Carpenter.

A lunchtime highlight was the exalted Sloppy Joe. Served on a buttery brioche roll, the Moroccan-inspired stewed pork and lamb Merguez sausage seasoned with cumin, fennel, coriander, garlic, onion and smoked paprika erased most other Sloppy Joes from memory. As my lunch partner put it, this isn’t your mom’s Sloppy Joe. The chicken salad is solid; it combines roasted chicken, fennel, red onion, golden raisins, green apple and toasted walnuts for a pleasant, but not mind-blowing, familiar bite.

Even so, a $10 lunch that isn’t fast food is hard to find, and being affordable for the surrounding neighborhood (and the slew of Trinity, Incarnate Word and San Antonio College students that also live nearby) is something Leman and Wiley have made a point while creating menus. Leman, a musician-turned-restaurant owner, and Wiley, a 15-year industry vet who remembers his days as a college student, are desperately trying to keep reasonable price points for lunch and dinner.

It’s in the evening when Wiley really gets a chance to play. The Texas Culinary Academy-trained chef has made his rounds in SA’s food scene (Polo’s at the Fairmount Hotel, The Lodge, Saffron, La Barranca, Hotel Contessa’s Las Ramblas, Westin Riverwalk and most recently, NAO New World Flavors at the Pearl); but this is the first venture where he’s been asked to create an opening menu and run the nighttime kitchen for a grassroots neighborhood bistro.

Diners have to trust Wiley’s vision. The menu is short, a scant four items per section (small plates, salads and large plates), with the most vague of descriptions. But, in Wiley we trust. The airy crab beignets, which border on fritter territory, are chock-full of fresh lump crab and marscarpone cheese. A caper-tarragon mayonnaise finishes the dish and makes it difficult to share.

Wiley’s love for everything Spanish-Mediterranean comes through in the papas bravas, perfectly fried potato cubes coated with a sherry chorizo aioli and finished with French feta that hit all the right notes.

The crispy pig belly salad, available without the protein (but seriously, go for it), is an excellent vessel for chef’s attention to detail and technique-driven background with its precisely placed Fuji apple slices, fresh bed of fennel, rucola and crisp parsnips laced with a apple soda gastrique sauce. The pig belly, prepared through several stages of curing, braising, resting and portioning, soars with caramelization and hints of cherry, green apple and port.

If you’re in the market for a serious dining experience that thrills and satisfies, go with the scallop/lamb fideo. Again, this isn’t your mom’s fideo. Wiley first created the dish in 2008 while at Las Ramblas, but we weren’t ready for it then. The spirited vermicelli dish is bright and “poppy,” a term chef uses to describe the orange, red and green hues on the plate. The Merguez makes its second appearance on the menu, and the diver scallops a la plancha are finished with a dollop of a nut puree that combines, among other things, pasillas, hazelnuts and ancho chiles. Don’t forget the fresh peas and piquillos. It’s flat-out yummy.

Beat Street also scores with its dehydrated-olive and gremolata-crusted tuna, atop a traditional cold ajo blanco soup dotted with crispy artichokes and traces of green apple—the briny flavors will persuade any olive dissidents to change their ways.

Whether Beat Street catches on as a coffee shop, lunch spot or intimate dining bistro is up to its patrons. But the coffee and dishes offered, not to mention the accessible wine menu, are bound to find their place in hearts of anyone looking for a first-rate dining experience at starving artist price points.

Where some coffee shops bite off more than they can chew by offering subpar sandwiches, or where restaurants pair beautiful dishes with lackluster coffee, Beat Street manages to not…well, miss a beat.