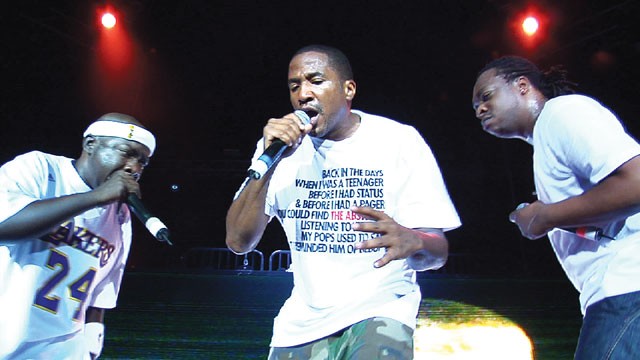 Haters, brace yourselves. The biggest star of Beats, Rhymes & Life: The Travels of A Tribe Called Quest may not be the dandy MC Q-Tip or his pauper foil Phife Dawg. It may not be the mystic, on-and-off member Jarobi White, or straight-talking producer/DJ Ali Shaheed Muhammad. The starman here is first-time director, long-time actor Michael Rapaport. That may come as a blow, especially considering that Rapaport screened the film at the 2011 Sundance Film Festival without the band’s consent. And Q-Tip’s recent release of e-mail exchangs among film staff illustrating blatant disregard for Tribe’s creative wishes deepens the strain. But Rapaport’s film leaves no room to question his love for the canonical hip-hop group. The opening montage alone is a fan-service assault, featuring glorious re-interpretations of the art that defined many of Tribe’s album covers. Rapaport also brings in an epic roster of rappers and key players to discuss Tribe’s relevance, from the Beastie Boys to Pharrell Williams to a number of industry execs.

The film’s crux becomes the strange beef between Q-Tip and Phife Dawg, a thing that boils over moments before a sold-out San Francisco set in 2008. The rivalry is what you’d expect from two people who have known each other since grade school: deep, fluid, and as intractable as it is unintelligible. Like a disgruntled married couple who can’t quit each other. Rapaport is a delicate genius in illustrating the MCs tortured dynamic. Long before any of the cast come out explicitly, you realize that Q-Tip’s ambition can degrade into megalomania and Phife’s self-deprecating charm slides into perfect victimhood. Both display rampant passive-aggression when the other is absent, either to friends or to the camera directly. But then the two of them work out a dance step during rehearsal with nary a word between them and the bro love runs thick and hot.

Beats, Rhymes & Life will remind hip-hop enthusiasts of a simpler time. With rap now in its fifth decade, Rapaport presents the formation of Tribe over 20 years ago as the genre going to college to find itself. At the time, hip-hop was splintering off into wildly different sub-cultures, all of which featured strong political sub-text. The Afro-centric jazz aesthetic of early Tribe fit perfectly with the equally bohemian antics of De La Soul, The Jungle Brothers, Queen Latifah, and other members of the Native Tongues collective. Between the militant Public Enemy and the shocking N.W.A., Native Tongues found a middle ground to positively reflect on urban life. Rapaport reminds us that as Tribe’s creative output deteriorated in the mid- to late-’90s, a certain innocence fled the scene.

Rapaport chronicles other Tribe dramas here, such as Phife’s ever-worsening diabetes, Jarobi’s on-again-off-again relationship with the band, and the first breakup in 1998. On the lighter side: We see Q-Tip use a desk in his old high school as drum kit. We listen to Queens resident Phife defend his love of the Lakers. We watch Jarobi manage his restaurant, Muhammad impersonate a radio dial, Q-Tip fawn over the cover of a favorite record before extrapolating the drum break for “Can I Kick It?”

All told, the movie is a reverent, nostalgic, and humane portrayal of a band no one is quite ready to let go of. And while Rapaport’s relationship with Tribe may be strained today, hopefully he’ll make amends. His doc doesn’t just expertly capture the tenuous relationships that seem to both feed and impede the group’s creativity. It also makes a colossal plea for the band to make another record. Be sure to watch the epilogue for the not-so-subtle hint. •

Beats, Rhymes & Life: The Travels of A Tribe Called Quest