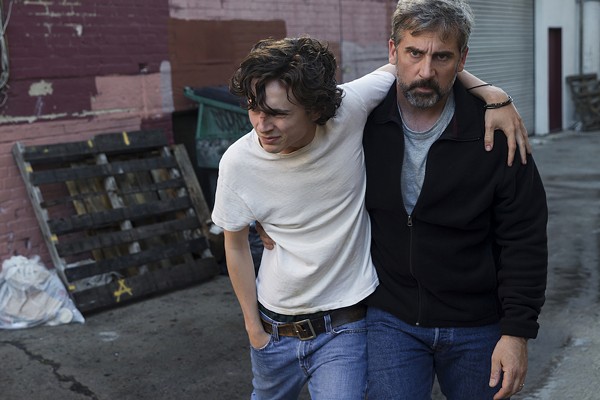 The opening lyrics of John Lennon’s moving single “Beautiful Boy” off his 1980 album Double Fantasy are a bit too precise when comparing them to its namesake film: “Close your eyes, have no fear / The monster’s gone, he’s on the run and your daddy’s here.”

Beautiful Boy, a drama about drug addiction directed by Belgian filmmaker Felix Van Groeningen (The Broken Circle Breakdown), is a neatly packaged picture, for better or worse. It’s reminiscent of an episode of A&E’s Intervention — but one of those really dramatic shows where it takes the family forever to convince their loved one who is hooked on heroin to go to rehab only to see them quit the program the following day.

Beautiful Boy seems to have all the pieces it needs to tell a heartbreaking true story about a teenager on a downward spiral because of his dependency on crystal meth. The film is adapted from two memoirs — Beautiful Boy: A Father’s Journey Through His Son’s Addiction by David Sheff, and Tweak: Growing Up on Methamphetamines by David’s son, Nic Sheff. As the co-writers of the screenplay, Van Groeningen and Oscar nominee Luke Davies (Lion) consider both sides of the narrative and allow for David’s and Nic’s perspectives to get equal time to flourish and intensify.

It helps immeasurably that behind the characters of David and Nic are Steve Carell (Foxcatcher) and Timothée Chalamet (Call Me by Your Name), a pair of Academy Award-nominated actors who portray a helpless father and dispirited son with such amazing conviction. It’s especially true for Chalamet, whose range in the film expands and leads him into some incredibly vulnerable places as a young man with no way of beating his addiction on his own.

As David, Carell gives his best performance since landing an Oscar nod for 2014’s Foxcatcher. Just as the lyrics to Lennon’s “Beautiful Boy” reveal, Carell plays a devoted parent (as do Amy Ryan as his mother and Maura Tierney as his stepmom) who would do anything to save his son from his demons (in one scene, he snorts meth in an attempt to understand what Nic is feeling). Carell’s role speaks to the heart of what makes Beautiful Boy a powerful, albeit imperfect, account of a family’s fight for survival.

One could argue that to make a more significant impression, Groeningen and Davies should have pulled back the curtain to expose some of the darkest corners of drug addiction instead of simply showing audiences the scenarios that explore the hopes, disappointments and fears of the characters. With Carell and Chalamet at the forefront, however, Beautiful Boy is still an insightful and uplifting father-son story where unconditional love is the real star of the film.