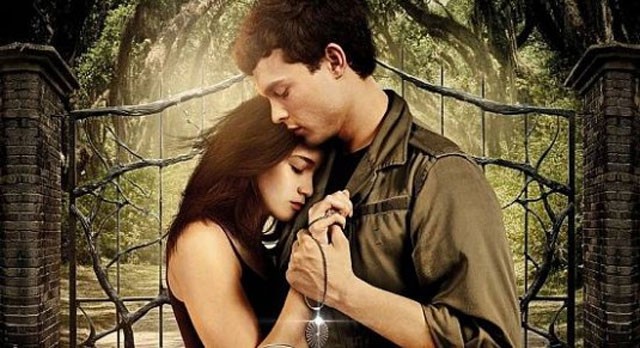 There is exactly one fascinating line of dialog in writer-director Richard LaGravenese's faux gothic Beautiful Creatures. It is spoken by the insubstantial yet wicked witch Sarafine Duchannes (Emma Thompson), who hopes to convince her daughter Lena (Alice Englert) to embrace dark magic and rule over all humankind. “Love,” she explains, “is a spell created by mortals to give women something they can have besides power.”

Had LaGravenese thematically explored this fiery feminist critique of modern patriarchy, his florid teen supernatural romance — adapted from a best-selling series of novels by Kimi García and Margaret Stohl — would have forever dispelled Stephanie Meyer's odious Mormon ode to passive girl power instead of becoming Bewitched 2.0 for mopey Millennials.

Things start promisingly enough with Ethan Wate (Alden Ehrenreich), a restless 16-year-old who sees his hometown of Gatlin, South Carolina as an intellectual and cultural straightjacket. Good church-going folk enforce the Southern smiley-faced fascism of good manners, school prayer, and poisonous gossip. Ethan's only refuge is the banned books he devours at home, and we get to know the smart-alecky youth through an entertaining voice-over narration.

Enter the enigmatic and alluring new student Lena Duchannes (Alice Englert, daughter of director Jane Campion), who lives with her reclusive uncle Mason Ravenwood (Jeremy Irons). Before you can say “Charles Bukowski,” the two teens are connecting over forbidden literature and their fermenting hormones. Too bad Lena is part of a long line of witches — or “casters” as the family prefers to be called — awaiting her 16th birthday, where her true nature will be revealed and she will either embrace the dark or light side of the force... er... magic. Worse, her romance with Ethan is literally cursed because of a past historical connection. This being the South, the Civil War, of course, plays a role.

For roughly 40 minutes, Beautiful Creatures seems intent upon poking fun at everything the Twilight films embraced. The campy comic banter between Thompson (hamming it up in two roles) and Irons seems to acknowledge the story's trashy goth-rom origins, while Ethan's observations and asides constantly skewer the depressive chastity and empty-headed melodramatics of Bella and Edward. Englert and Ehrenreich don't just obsessively stare at one another but actually have conversations. LaGravenese's dialog isn't exactly rife with profound outsider insights (despite plundering Kurt Vonnegut, Anthony Burgess and Henry Miller) but at least it approximates real teen interests and emotions. It helps that the two leads have a nerdy, authentically awkward chemistry.

Unfortunately, just when things settle into an engaging rhythm Beautiful Creatures' lumbering supernatural plot mechanics and second-rate digital effects kick in. All semblance of wit, intelligence, and insight flies out the CG-shattered windows. Instead we're treated to an over-complicated back story, less-than-urgent dangers, an insubstantial villain, and a cast of hastily sketched supporting characters. Viola Davis suffers the greatest indignity, literally playing a magic negro who holds down two jobs: one as a housekeeper and the other as a supernatural librarian. Both serve white people.

One would hope that when both a book and film take their title from Bukowski's "The Way It Is Now," they would be inspired to say something meaningful about the social alienation teens inevitably experience. It's clear, however, that LaGravenese and the film's producers looked at Twilight's box office returns and decided to embrace the “classic stupidity” — to borrow from the Poet Laureate of Skid Row — of mainstream Young Adult conventions.