Beer Cocktails: Because Booze and Brews Should Be Friends 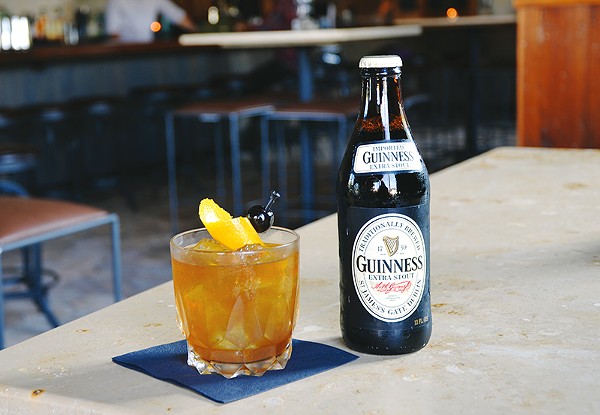 It all began — and this is pure speculation — with the boilermaker, that everyman's after-work combo of beer and a shot. From there, it seems entirely possible that, as in fashion, the trickle-up process began its work: first, we get fancier combinations of suds and tipple, such as an Imperial Stout chased by Fernet-Branca, then the urge to combine the two in the same glass becomes overwhelming.

However this actually happened, today's 'tenders are finding new ways to put the brewer and the distiller in bed together. Mashups of the Mexican bulldog or Dos-a-rita sort are entirely too unnatural to be considered here.

Some legitimate pairings are more like marriages of convenience in that the beer doesn't get down with the spirit but is floated on top in the way that Champagne tops a French 75. Upping the ante on this concept, Stephan Mendez, Jeret Peña's Boulevardier Group Beverage Manager, now frequently found at The Last Word, created this drink while at 1919 (and also trotted it out at Esquire and the Blue Box). He calls it The Almost Collins:

Shake with ice, strain into a Collins glass filled with ice, top off with a hoppy IPA beer and garnish with a slab of grapefruit peel.

Taking a different approach, Nick Kenna, formerly at Dorcol but now managing much of Steve Mahoney's expanding empire, uses beers, boiled down with sugars and spices, in concentrated syrup form for drinks such as Blue Box's What the Hefe? in which he uses Live Oak Hefeweizen with cardamom and banana. The Irish Old Fashioned at Francis Bogside is another with Guinness Extra Stout reduced with demerara sugar added to Irish whiskey with orange bitters.

Sprinkled throughout the cocktail menu at The Hoppy Monk on 1604, the intrepid investigator can find a schooner-load of drinks bolstered with beer — some also with syrup reductions. But there are also a few with deconstructed beer components. Ricardo Ruiz, a manager who came to San Antonio from the original location in El Paso, says HM's cocktails are a collaborative effort and that hops tinctures (powerful tasted straight, but judiciously dispensed with an eye dropper) are among the ordinance in their arsenal. You'll find this, and house IPA syrup, in Pliny's Daiquiri with white rum and thyme. If you order it, check out the beautiful bubble structure the beer gives the drink.

The Pliny Daiquiri's bubbly build happens because, unlike many, Ruiz is not afraid to put beer straight into the shaking tin. "You have to be careful as it is carbonated," he says — and I admit that I was hoping for an explosion. But the only fireworks were in the glass. That daiquiri was a thoughtful take on the classic.

Ruiz's Pale Horse with a peaty scotch and a pilsner was unexpectedly cinnamon-and-clove spicy. His Cemetery Gates with barrel-aged IPA and gin moved beer to the front and the De Peche Mode, employing Dorcol's Kinsman rakia and a Belgian peach lambic countered the drink's sweetness with a touch bitterness.

Ruiz is continuing to experiment with beer-booze interactions, lately with some of his nitrogen-delivered taps. Expect smaller bubbles, a creamier texture ... beer nerds and booze hounds alike will find common ground here.