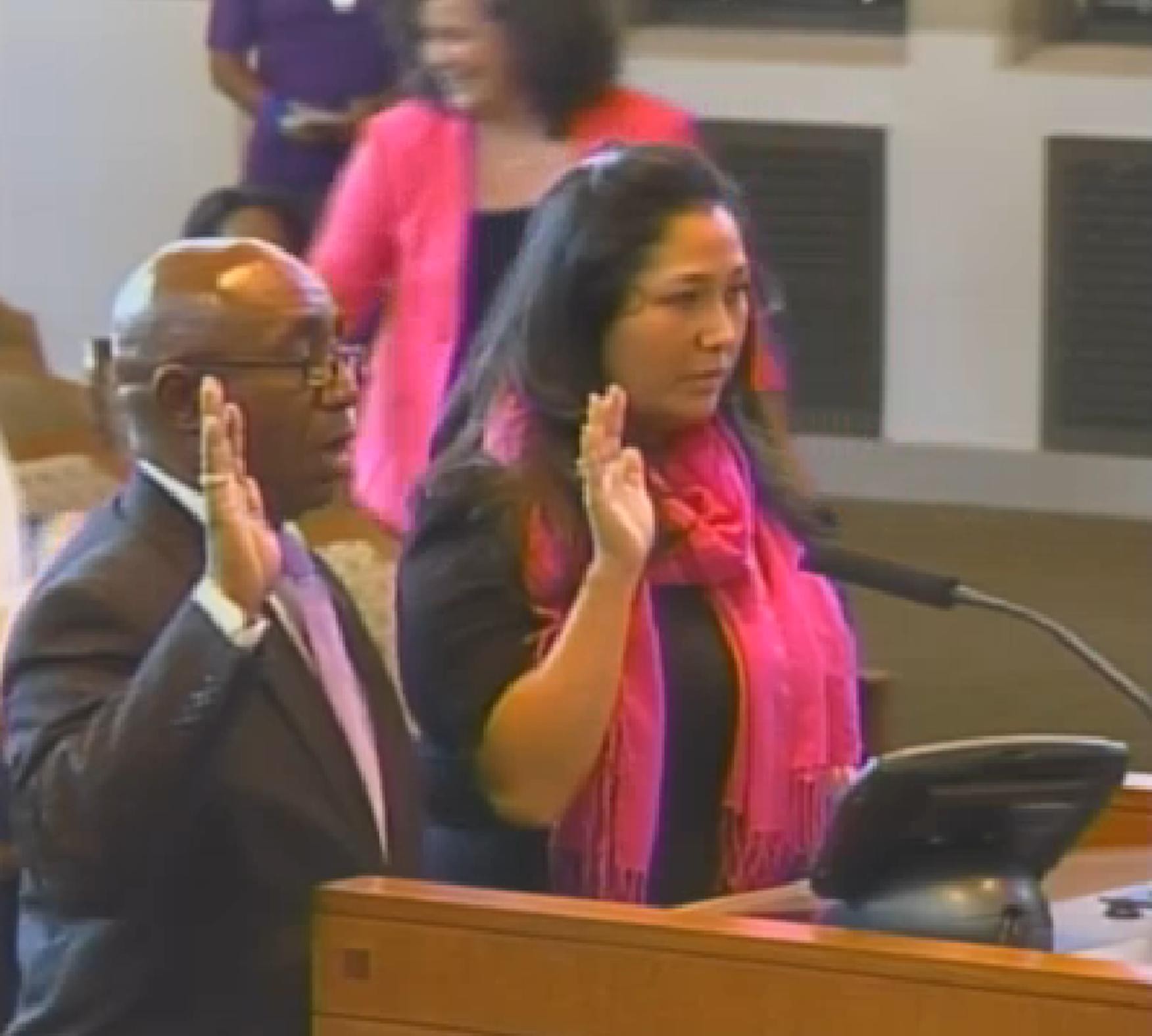 This screen shot taken from a live-streaming session of city council shows newly-appointed District 2 Councilman Keith Toney and District 7 Councilwoman Mari Aguirre-Rodriguez being sworn in. Aguirre-Rodriguez will serve temporarily until Councilman Cris Medina returns from military training and Toney will serve until Nov. 4, after which a replacement will be elected by voters.

San Antonio City Council members chose appointments for two council vacancies Thursday, but residents didn’t get to hear the final arguments leading up to the picks.

After convening into executive session for approximately an hour, the council unanimously appointed Mari Aguirre-Rodriguez, 35, to temporarily fill the District 7 seat while Cris Medina is on leave for National Guard training. And Keith Toney, 62, was appointed to the District 2 seat that was left vacant after the council voted to name Ivy Taylor as interim mayor. The public also wasn’t privy to the final arguments that lead to Taylor’s appointment, which occurred in executive session too.

So San Antonio residents haven’t voted on two new council members or the interim mayor. But hey, at least all of the positions are temporary.

Anyway, Toney, who served on a school board for 15 years, will hold the District 2 seat until a special election on November 4. Aguirre-Rodriguez, who is the founder and president of Opt in Experts, a company involved with branding, public engagement and philanthropic strategies (she's also a former Racker), will run Medina’s office until he returns to the dais in October.

During the council session, all of the applicants, which included Alan Warrick II, 33, and Lester Bryant, 56, for the District 2 vacancy, and Yolanda Arellano, 67, and Michele Dalbis-Robledo, 55, for the District 7 temporary spot, all publicly answered a handful of questions from several council members.

Since there were only a few questions asked, we decided to take a look at whether the new council members gave meaningful responses to some of the council's inquiries.

District 10 Councilman Mike Gallagher asked District 2 finalists how they would speak to residents about gentrification. Toney admitted that residents feel angst “around gentrification and so-called gentrification,” but those feelings are cultural to the “well-entrenched and older generation that get anxious about millennials.” While Toney said he didn’t see people being “put out or run out of their homes” he does see a changing landscape as young people move away and elderly people die. “So we have to be very sensitive about it but it is a balancing act and I think that also, once those cultures come together, and they see they can enhance each other, I think it can work

let’s sit down and talk,” Toney said. We think Toney mostly answered that question, which was a slowly-lobbed softball that landed right down the middle of the plate.

District 6 Councilman Ray Lopez had a more pointed question for the District 2 applicants: Lopez wanted to know whether they supported raising property tax, which hasn’t been done in 22 years. Toney said instead of raising property tax, which could result in $7 to $14 million in revenues with an increase of a penny or two on the tax, the council should look at raising the hotel and motel tax, along with fiddling with tax-increment financing to require companies looking at relocating or building in San Antonio (he mentioned Tesla) to kick back a nickel per every $100 of their tax break for the duration of their years-long tax break. We think Toney handled the question well and answered it better than the other candidates who skirted around a direct answer.

As for Aguirre-Rodriguez, who will temporarily fill Medina’s seat, we’ll start with a softball question she got that at least has a little bit of a spin on it. District 5 Councilwoman Shirley Gonzales asked the applicants what they would like to see increased, decreased and maintained in the Fiscal Year 2015 budget. Aguirre-Rodriguez wants an increase in money for infrastructure in her district and wants to maintain funds for human services, like educational programs. However, she didn’t have anything to say about what she would like to see decreased.  Hey, two out of three isn’t all that bad though.

District 9 Councilman Joe Krier honed in on Lopez’s question to the District 2 candidates and asked whether the applicants would consider a “revenue enhancement,” which Krier coyly admitted is government-speak for property tax increase. Aguirre-Rodriguez conceded that she didn’t know whether she supported a property tax increase. “I’m not sure how I feel,” she said, adding that the budget process will help her find a position. Aguirre-Rodriguez also said she needs to do more research and would lean on the current council for guidance. “”I think I’m open and I particularly want to hear from the district about what they’re thinking.”

Well, we’ve covered the questions that had some meat. And for the record, the council also asked whether applicants would be able to commit their time to the positions and whether District 7 candidates had a plan for transitioning out when Medina returns to the dais.

However, the real questions and important topics were likely discussed in executive session so it’s hard to tell whether the interim mayor and the council's explanations to local media behind their votes would match up with what happened behind closed doors in the council chambers.

But again, at least this is all temporary while voters wait just a little longer before voicing their opinions for District 2 at the ballot box in November. And after that, the entire council and mayor’s seats are up for grabs in May 2015.