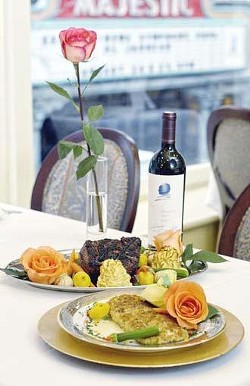 
There are numerous grand gestures associated with the Bohanan's dining experience. First is the entry procession through Houston Street's new courtyard, carved from once-and-former retail space next to the old Frost Bros. building. (If the mutant mushroom fountain seems klutzy, concentrate instead on the exuberantly Baroque, fettuccine-on-a-fork torchieres.) The sequence continues with a short elevator ride: Face rear, for it's those doors that will open onto the burnished bar - like the rest of the space, no expense has been spared.

Chef/owner Mark Bohanan is especially proud of the original pine floors. Carefully refinished, they are the only vestiges of the modest sales space that once housed Carl's Clothing Store, then Joseph's; every other surface has been embellished to a fare-thee-well with panels, coffers, moldings, swags, sconces, and other traditional trappings. The result is a look-at-me, country-club atmosphere - not altogether unpleasant, but somewhat pretentiously posh nonetheless. Anyone up to ordering the 30-ounce, $69.95 Porterhouse steak may feel free to disagree, of course.

The gestures expand with the weighty menu and the long-stemmed rose at each table. And they continue with a no-stem rose on each plate, a gambit that was amusing the first time out and became a joke by the third appearance. There being no finger bowls - surely an oversight - to float them in, one is at a loss as to how to deal with this embarrassment of rose riches. Perhaps I'm being overly reverential, but a blush-pink blossom does not look good besmirched with burgundy mushroom sauce.

Bohanan's wine list, organized by grape varietal, is as daunting a document as the menu, but several good wines are to be had in the $30 range. Normally, such modest bottles wouldn't be subjected to the elaborate decanting ritual that will follow if you acquiesce to the waiter's suggestion. By all means acquiesce. Our 1997 Baroncini Cosina di Giglio Chianti Classico Riserva was ceremoniously uncorked, the bottleneck illuminated by a candle set atop an upturned wine glass. Then the waiter slowly poured the wine into a carafe. The candle is meant to signal the presence of any sediment, not an expected condition with the wine in question, but what the hey, the show is good. So was the wine, by the way; it may have started out the evening seeming thin and aloof, and although it never became rustically voluptuous, an aristocratic noblesse oblige did eventually emerge.

Finally to the food. We can dispense with the duck confit eggrolls with a single gesture of our own: Off with their heads! It's rare to encounter a dish so totally tasteless, and the accompanying "Thai" dipping sauce (better thought of as a marmalade for spreading on bread) was of no help. Fortunately, no further outbreaks of this magnitude will be necessary; the seared aji tuna with pickled ginger, wasabi, and an "Asian reduction" (seemingly soy and sugar, though the composition is said to be a chef's secret), was exquisite.

Chef Bohanan's gazpacho is not traditional (according to our waiter, at least, it has neither the bread nor the pounded almonds that characterize most versions), but the blended cucumber and vinegar emulsion, garnished with chopped green onion, tomato, and toasted almonds and served in an amusingly elaborate contraption, is extremely refreshing. The chef's Caesar salad, a tableside prep opportunity that, surprisingly, is not taken advantage of, is equally fresh and snappy, but the dressing, said to contain anchovy, lacks punch.

In traditional steakhouse fashion, your main plate will be totally a la carte; even the sauces are served (and priced) separately. The good news is that you may not even need to bother with sauces. The highly touted burgundy mushroom version was way too winey, and the USDA Prime New York strip was flavorful enough in its own right not to need any embellishment. The French-boned Australian red deer chops, resplendent in their gold foil party hats, were even more robustly meaty - so much so that a slight overcooking hardly mattered. The intended Bearnaise sauce, although properly touched with tarragon, seemed timid in comparison. "Choose your weapons," quipped our waiter in anticipation of another of Bohanan's gestures, the presentation of the steak knives. Looking for all the world like a case meant to contain dueling pistols, the wooden box houses almost-as-lethal-looking Henckels steak knives. With our meat choices, such firepower was as unnecessary - as it probably would be with the filet mignon, ribeye, Chateaubriand, lamb and venison tenderloins, boneless European quail, and breast of chicken that are among the other mesquite-grilled options.

Bohanan's seafood selection is diminished by the inclusion of the overfished Chilean sea bass, but other acceptable possibilities include three snapper renditions, scallops, salmon with dill, and shrimp two ways. Available sides are the same for all entrées, and if the herb-flavored mashed potatoes seemed bland, the wild rice pancakes with poblano cream were consumed to their last crunchy-creamy fragment. The sugar snap peas, however, stole the show with their less-is-more perfection.

The evening's final manifestation of pomp and circumstance can be yours with the selection of Bohanan's "Flaming Specialties": Bananas Foster, Cherries Jubilee, and Strawberries Imperial; we would have imagined no less. Cloying of spectacle, we chose instead the much more modest torta di cioccolata, accompanied with a waiter-pressed coffee - the last service flourish. The cakey torta was too cold for the flavors to truly blossom, but it was basically good, and the presentation, with fresh raspberries and drizzled sauces, was handsome. With such a finale and in such a setting, it's hard to imagine Frito pie being served at lunch, but such is said to be the case. Should you choose a wine under such circumstances, modesty must forbid having it decanted. •