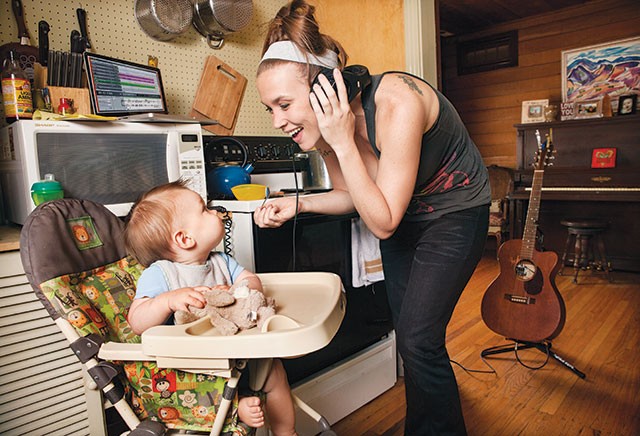 When my wife had a baby it was the perfect excuse for me to miss deadlines, show up late at work or not show up at all. Now, a year after you decided to leave Seattle and come back home to have your baby, you decided to instead have two babies: Kaius, the two-legged one, and Within the Shifting Shade, the round one with a hole in the middle (aka CD). It is the best album of your career, and just in case raising a baby wasn’t tough enough, you continued playing shows to support the album, doing TV appearances (KABB Fox 9) and who knows what else. Time is not an issue for you; you seem to be able to do it all, and I congratulate you for it. Having said that, you’re ruining it for the rest of us mortals. How the hell do you do it?

“Well, namaste to you too, buddy!” Kelso replied via email, probably while making breakfast or in the middle of a diaper change. “If it makes you feel any better, this is far from a solo act. I’ve got the most amazing support network in the history of happiness. Trust me. Without them I’d spend weeks at a time in my pajamas, spooning Cheerios from the box and singing jazz renditions of ‘The Itsy Bitsy Spider’ for a half-interested party of one.”

Team Bekah consists of her partner Sean-Michael Argo (Kaius’ dad), her parents and siblings and, of course, her guitarist/producer Damián Rodríguez, who has reasons of his own to celebrate: he won as Best Producer.

“They’re each a unique and important part of this machine,” said Kelso, still ignoring the fact she had won in two categories. “And then there’s EVERYONE ELSE. Man, you know you’re living right when you’ve lost count of the number of good folks who have your back. The Universe has been very kind, very generous to me.”

Wait till you see this week’s issue of the Current.