Béla Fleck and Marcus Roberts bring their magic to Jazz'SAlive 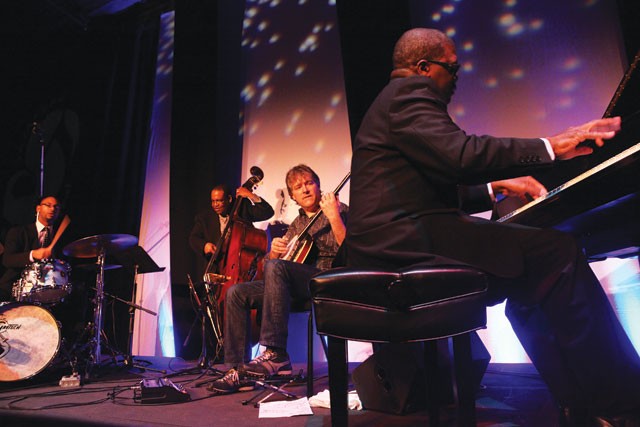 There's a certain built-in disappointment that comes with high-profile collaborations, no matter how successful (Duke and Coltrane, Queen and Bowie) or, well, not (Loutallica anyone?). The task of fusing two established sounds to create something that transcends the sum of their parts is next to impossible.

So when banjo master Béla Fleck and New Orleans piano ace Marcus Roberts ended up on stage together during an after-hours jam last year, few in the audience or onstage thought it would blossom into anything beyond a one-off curiosity. And yet, something clicked. There was "a natural rapport," as Fleck describes in the liner notes to his and Robert's new release, Across the Imaginary Divide, that seemed to "work from the first note."

Almost a year and several thousand notes later, Fleck and the Marcus Roberts Trio are still clicking, in a way that has continued to surprise audiences, perhaps even more than the initial pairing. Despite their dissimilar trajectories through jazz (Fleck through the 'blu-bop' fusion of his band the Flecktones, Roberts via the traditional jazz sounds first instilled during his tenure with Wynton Marsalis), their partnership has proved a rare and remarkable exception to the rule on collaborations.

Much of the success of Imaginary Divide comes through this unlikely synergy of both men's styles. Jason Marsalis, youngest of the famed Marsalis brothers and Roberts' long-time drummer, related some of the behind-the-scenes process of the record.

"They did have requests for each other," Marsalis said. "[Roberts] wanted a tune that featured [Fleck's] bluegrass playing, and [Fleck] wanted a tune that highlighted [Roberts'] ragtime knowledge. But what we ultimately found was that it was American music, so you do have elements of bluegrass and ragtime, but also gospel, funk, and swing all existing together."

Having now spent several months on the road supporting their critically acclaimed album, Roberts relishes the chance to take the quartet to the big stage at Jazz'SAlive Sunday, when the band will headline the closing night of the festival.

"When you have a big festival, it does feel like a celebration," Roberts said. "More people are getting a chance to check it out, and honestly there's more of a sense of community to it."

And while Roberts offered no specifics on what to expect during their set, he conveyed full faith that the creative energy of the collaboration would be in full bloom.

"There won't be any shortage of imagination," he said. "All kinds of wild stuff will be going on. I think that bands break up at the point where 'we're done but we're still doing it.' For us, there's definitely a sense that there is a lot to be done."