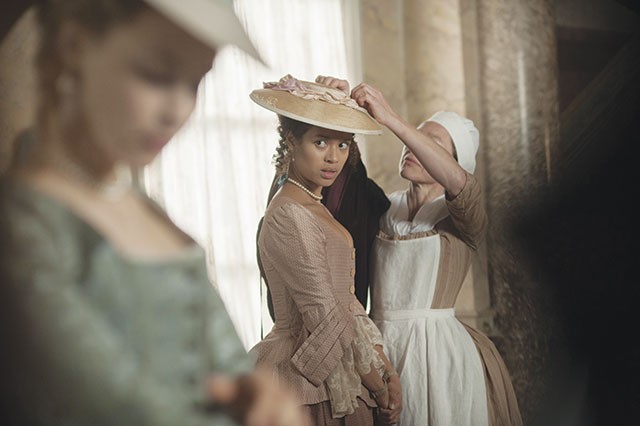 Belle, director Amma Asante’s and screenwriter Misan Sagay’s fictionalized account of the life of Dido Elizabeth Belle, a biracial women in 18th century England at a time when slavery still existed in the British Empire, is a captivating and moving film. It comes just this close to being a little too pat and easy—it’s highly predictable—but Asante’s light touch with the melodrama keeps it from dipping into bathos.

The movie opens with Captain Sir John Lindsay (Matthew Goode) standing before a 7-year-old Dido in what looks like an impoverished orphanage. He tells Dido that he’s her father, and with her mother dead—it’s not explained how—she’ll come live with his family at his uncle’s home.

Lindsay is days from an 18-month deployment, and when his uncle, Lord Mansfield (Tom Wilkinson, good as always), and aunt, Lady Mansfield (Emily Watson, who balances the humor and drama well), set eyes on Dido, they’re aghast. Lindsay didn’t tell them Dido is black because he knew it would be a problem, but Lord and Lady Mansfield can’t bear to turn a child away. Dido soon becomes best friends with another child at the estate, her cousin Elizabeth, whose father is essentially a deadbeat dad.

As adults, Dido (Gugu Mbatha-Raw, wonderful) and Elizabeth (Sarah Gadon, ditto), are still best friends, but they’re both stuck. Though Dido inherits a sizable sum of money when her father dies, she’s told no one will want to marry her because she’s black. Elizabeth has no dowry, so she’s also told she’s not worthy of marriage.

It’s as this point in Belle that the sexual and racial politics really come into play. Dido is prevented from dining with guests, but is allowed to join the family and company after dinner in the parlor. And it just so happens Lord Mansfield is Lord Chief Justice and presiding over the Zong slave case—a very real and horrible piece of history—that Dido becomes keenly interested in because her mother was a slave.

Belle’s aforementioned predictability revolves around whether Dido and Elizabeth will find men suitable to marry. There’s also Dido’s tentative love-hate friendship with John Davinier (Sam Reid), the son of a clergyman, who’s studying law under Lord Mansfield and highly critical of slavery as an institution.

But amid all the to-ings and fro-ings and corseted heavy breathing there are the excellent performances. Reid, for example, can barely hold in Davinier’s revulsion at the notion of slavery. It’s a welcome display of outright emotion.

Mbatha-Raw has perhaps the hardest job, conveying to the audience both Dido’s full comprehension of what’s going on around her (and wanting to scream about it) while being appropriately 18th-century ladylike. Gadon is her equal, and she has perhaps the movie’s starkest line about a woman’s place in society, no matter her race: “We’re all their slaves,” she says when she realizes not having a dowry is keeping her from finding a suitable match.

No doubt Dido’s situation is more difficult than Elizabeth’s, but Belle doesn’t shy away from some deep questions, even if it doesn’t really provide answers. The filmmakers bend history to suit their drama, but that only makes sense—do you really want to know how young the real Dido was when she died? It’s the performances that keep Belle moving, and it’s a brisk, wistful journey.