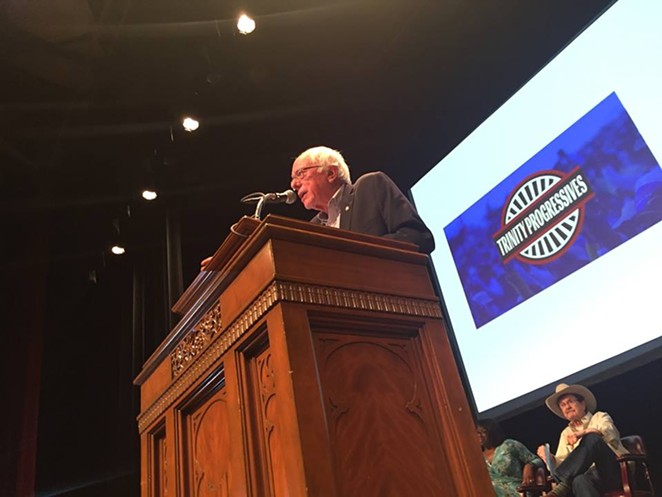 In the run-up to Sen. Bernie Sanders’ Friday night speech at Trinity University’s Laurie Auditorium, it was easy to imagine yourself in Portland or San Francisco.

Fifteen minutes before start time, with the 2,700-seat venue already full to capacity, a jazz combo blew through standards by John Coltrane and Sonny Rollins. The crowd, younger and decidedly more diverse than the one attending author Margaret Atwood’s talk the night before, crackled with enthusiasm. The seats nearest the stage, usually reserved for university bigwigs and donors, were largely filled with selfie-snapping students.

“We’ve already talked to people who were going to sneak in because they ran out of free tickets,” said Brian Callanan, 33, who drove down from Austin with his partner Erika Aurioles, 27, to hear the progressive firebrand and 2016 presidential contender. “I mean, look around: there are college students, there are old people, there are working people.”

Sanders came to Texas for a South by Southwest festival appearance, and in SXSW spillover form broke off for a San Antonio’s fundraiser for Our Revolution, the political organization launched out of his campaign, and the Trinity event. Saturday, he’ll appear at a rally in redder-than-Big Red Lubbock.

Dreadlocked Eric Richards, 35, waited patiently for the speech, a copy of The New Jim Crow, Michelle Alexander’s book critical of U.S. mass incarceration, steepled on his knee. He supported Sanders in the primary but voted for Green Party candidate Jill Stein after Hillary Clinton seized the Democratic nomination. Richards now regrets the decision, but he added that the evening’s turnout is a sign 2020 likely will play out differently.

“It speaks well for the future,” he said. “The tumultuous political climate has lit a fire under young people.”

Small business owner and Bernie fan Poppy Davis did cast her vote for Clinton after she won the nomination, but added that she’d support the 76-year-old Sanders should he decide to run again. She relies on Obamacare for her health coverage and worries what may become of the program.

“I’ll support Bernie until he drops dead or loses his mind, which I don’t think is going to happen,” said Davis, 47. “I just love him. I’ve just never had so much of a connection with a politician.”

After warm-up speeches by former Texas Agriculture Commissioner Jim Hightower and Ohio State Sen. Nina Turner, Sanders took the stage to a thunderous standing ovation. Some audience members surged closer to snap
photos as he smiled and waved. But it didn’t take long for Sanders to settle in behind the podium and the crowd back into its seats.

During Sanders’ hour-long talk, he told supporters that the same ideas he hawked on the campaign trail can become reality when they volunteer and vote for progressive candidates. The Our Revolution organization threw its support behind 29 contenders in the recent Texas primaries, he pointed out, and the majority won the right to appear on general election ballots.

Sanders saved his direct attacks on President Trump for the end of the talk, drawing a chorus of boos and hisses when he mentioned the billionaire reality star by name. Trump’s victory, he said, was a result of voter anger that can be channeled into meaningful change.

With the speech over, the crowd was back on its feet, clapping and whooping. They swarmed around Sanders as he shook hands from stage.

Josefina Fernandez, a 19-year-old University of Texas at San Antonio student, said Sanders’ talk strengthened her resolve to attend this so easy to feel cut off, so this felt good.”