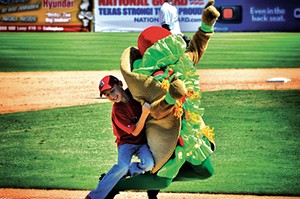 There are few minor league baseball mascots as cherished as Henry the Puffy Taco. This enthusiastic human-sized taco is known to steal the show at every San Antonio Missions home game — whether he’s taunting the visiting team, being barraged by a gaggle of children, or having a dance-off with mascot frenemy Ballapeño. We recommend you stick around after the sixth inning to watch a lucky kid chase Henry around the bases and ultimately tackle the giant taco (to Ballapeño’s delight) on the home plate — a real-life renaction of your favorite dream. Named after the local taco joint Henry’s Puffy Tacos, the 28-year-old taco is anything but stale. With a fluffy tortilla and colorful toppings, it’s no surprise Henry calls his costume “a body armor of love.”