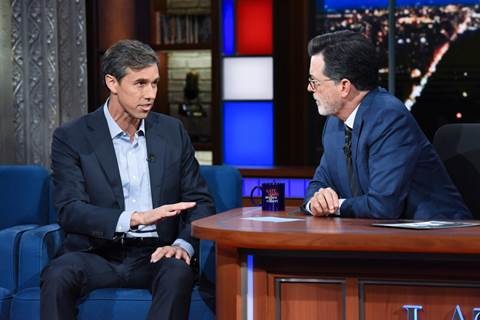 Rep. Beto O'Rourke made his debut on late night television on Wednesday as he sat down with Stephen Colbert.

A week after visiting with Ellen DeGeneres on her show, the Texas congressman stopped by The Late Show with Stephen Colbert to meet the political satirist. Colbert started light, asking O'Rourke about his nickname "Beto" as he showed a 1976 photo of the congressman with his name stitched onto his sweater.

Naturally, his punk rock past came up as well, which O'Rourke called his greatest experience at the time. But a lot has changed in the 20 years since then. O'Rourke drew parallels between touring with a band and driving across Texas, visiting all 254 counties, but made sure to touch on serious topics during his segment.

Colbert was sure to ask about immigration, with O'Rourke confidently saying, "We don't need a wall."
As he has in the past, O'Rourke used his hometown of El Paso as an example of a safe city made up of immigrants who respect each other. He said he supports Dreamers, and that immigration reform should include making points of entry safer instead of erecting a wall.

Colbert was talked about O'Rourke's chances against Ted Cruz. The senator has launched attack ads against O'Rourke and has been backed by President Donald Trump in light of polls showing the two contenders within the margin of error.