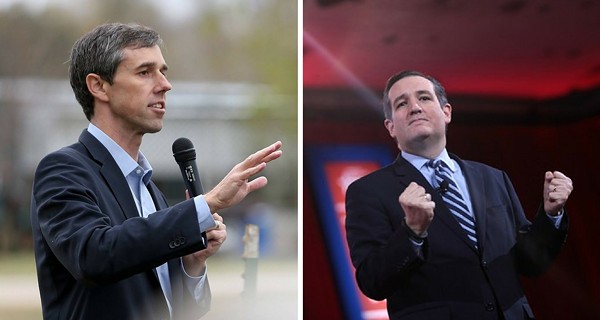 In his underdog run to represent Texas in the U.S. Senate, El Paso Congressman Beto O'Rourke has again out-raised GOP incumbent Senator Ted Cruz. According to his campaign staff, Democrat O'Rourke collected $2.4 million in the last three months of 2017, while Cruz raked in $1.9 million over the same period.

O'Rourke also raked in more campaign dollars in 2017's second quarter. Cruz, however, out-raised O'Rourke in the year's third quarter. While this back-and-forth makes the two appear equal in the money race, the story looks a little different on paper.

Cruz still boasts having $7.3 million cash on hand, a lot of it made up of political action committee (or PAC) dollars — private groups of mega-donors which O'Rourke has refused to accept money from. The El Paso native has also avoided taking on any loans to bankroll his campaign. As of now, O'Rourke only has $4.6 million cash on hand.

O'Rourke has spent the past few months on the road attending town halls across Texas, leaning on social media to interact with voters along the way — a tool he mastered in March when, after learning their flight from San Antonio to D.C. had been cancelled, O'Rourke and fellow Texas Congressman Will Hurd livestreamed their 1,600-mile "bipartisan roadtrip." In fact, O'Rourke just wrapped up a 24-hour Facebook live marathon which featured hundreds joining him for a 1:30 a.m. town hall in Austin (followed by a 5:00 a.m. jog).

It's the same kind of grassroots energy coming from a long-shot candidate that Texas felt during Cruz's initial run for Senate in 2012, largely propelled by the Tea Party movement.

Both candidates are expected to easily sweep the March primary elections, shedding off lesser-known party candidates before they face off in November.