Between the Buried and Me Build Metal Collage 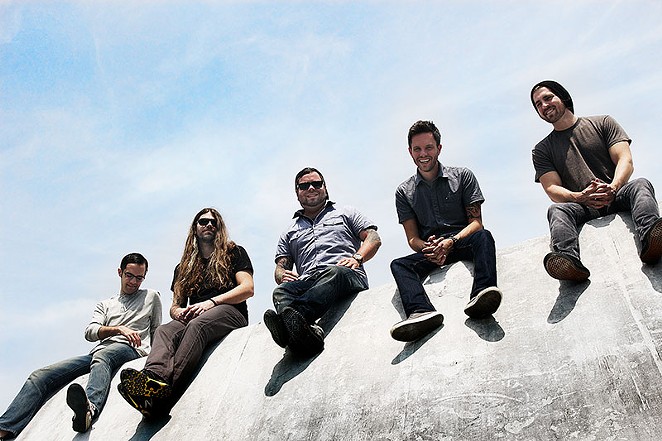 The medium of collage speaks as much about the sources of components as it does about assemblage itself, more so all of these elements speak to the choices made by the artist. The disparate tropes that fall beneath the umbrella of metal that Between the Buried and Me use displays the berth of knowledge BTBAM has to create this music, but it's in the notion of creating grandiosity that all these choices make sense.

Their latest album, Coma Ecliptic, has its slow builds to epic arrangements — it's a rock opera. However, it leapfrogs throughout so many different styles of metal that it certainly isn't the rock opera one would picture, but it also still very much is. This band isn't confined to death metal, or prog, or whatever else fits. This is a band well-versed in metal and is making all the choices in these sprawling songs — falsettos and growls, power chords and arpeggios, standard beats and fascinating fills — to make something larger. All these ingredients function as a dense foundation so this creation doesn't topple over on itself.

Thus there's the question of execution — can these guys pull off these nine-minute songs in the live setting? Is it as dynamic to watch as it is to sit through?

These guys are pros. They've been at it for a decade at the constant whim of Tommy Giles Rogers. They certainly seem to have grown to a point over the course of seven albums to make an everything-but-the-kitchen-sink rock opera. If their longevity is tied to their populism, and for a band that has risen to these heights how can it not be? It would seem such grandiosity of sound is most appropriate for the Aztec Theater and its spate of new bookings, amenable to such mid-sized acts.

In essence, the aural collage of Between the Buried and Me proves the group's adoration of its surrounding scene and everything that makes it up. These are the decisions BTBAM has made and they pull them off to the delight of their fans. A city like San Antonio, very much a metal town, is aptly among them.

Between the Buried and Me Feat. Enslaved, Intronaut and Native Construct

Live & Local Between the Buried and Me