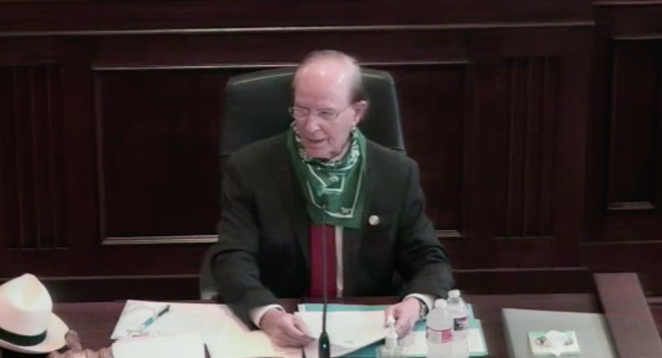 The nonbinding resolution flies in the face of a letter from Texas Attorney General Ken Paxton ordering election officials not to expand absentee voting. The correspondence, sent earlier this month, threatens to jail "third parties" who advise voters they can vote by mail if they're worried about potential infection during the pandemic.

Bexar District Attorney Joe Gonzales reviewed the state law and testified during Thursday's commissioner's court meeting that people qualify for mail-in ballots under the state's disability clause if they fear appearing at the polls could make them ill.

"It's very exasperating in the state of Texas when everything is done to suppress votes instead of to encourage them," Wolff said before the vote.

Statewide primary runoff elections are scheduled for July 14, and experts have said the potential spread of COVID-19 could also be an issue in the November general election if a second wave of contagion hits in the fall.

Multiple lawsuits now challenge Texas' narrow definition of its absentee voting rules, which primarily limit mail-in ballots to the elderly and people with disabilities. One of those cases will be heard Friday in U.S. District Court in San Antonio.

Voting rights groups side with Bexar County's interpretation of the law, saying that the risk of potential infection qualifies as a disability. However, the Republican attorney general maintains that the state rules should not be interpreted so broadly.

On Thursday, Texas' 14th Court of Appeals panel rejected Paxton's request to put a hold on a ruling by a Travis County judge that permits an expansion of mail-in voting. The AG had asked for the hold while the state exhausts its appeals process.

The new court decision means Paxton will need to "wait a while before he tries to put us in jail," Wolff said at a Thursday evening press briefing.

"We won at the state level, we won at the Court of Appeals level now," Wolff added. "I know they'll appeal to the Supreme Court, but we hope that this holds up. We all know the average age of [an elections] judge is 72 years old ... a group that's very, very susceptible to this."