Bexar County Community Fights to Pave Its Streets of Sand 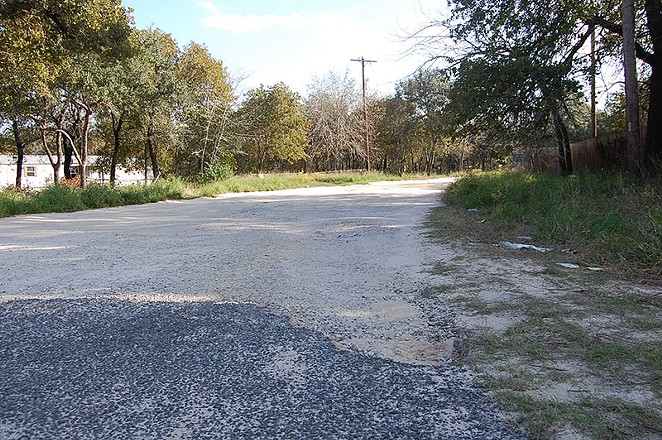 Most of the roads in the unincorporated Bexar County community are sand. Driving through the neighborhood is a delicate harmony between your foot and the accelerator. Too little gas and you sink into the street, too much and the wheels spin.

The 116-acre neighborhood of just over 250 households sits about a mile and a half south of Loop 1604, just off Highway 281. Its homes – most of which are single-story trailers – are full of working-class families, many of whom don’t speak English.

Over the past few months, members of the neighborhood have decided that enough is enough. Efforts to fix the streets have had a little success in the past – including winning a grant to pave a quarter-mile stretch of Memorial Lane, one of the main thoroughfares – but the current push has a new sense of urgency
.
“All the time I’ve been living there … it’s just been getting worse and worse and worse,” said Jacqueline Morales, who’s lived in Highland Oaks for three years. She and her husband are building a house in the neighborhood, but he’s having second thoughts because of the streets.

“My husband says … we should have never bought there,” Morales said. “But when you’re young, because we got married really young, when you have the opportunity to buy a piece of land, he didn’t mind. But by the time that we bought it until now that we’ve moved in, we’re seeing how it really is.”

Morales and her neighbors, with the help of groups such as the Daughters of Charity Services and COPS/The Metro Alliance, have lobbied developers, elected officials and nonprofits for help. The bits of progress they’ve made have been hard-fought, sawing through thick layers of red tape and shouting for the attention of those in power. All the while, grains of sand, which compose the streets, drift away in the breeze.


Walking down Highland Oaks’ streets is like walking on a beach. The sand, which is deeper in some places than others, clings to shoes, stray dogs, trees and bare feet. Tires tamp down strips of street to make thin lanes.

Rain helps. It compacts the sand and makes it denser, lowering (but not eliminating) the risk of getting stuck. In some places, residents have tried to increase the traction by planting bricks, dry leaves or pieces of cement in the sand. It works for a little while, but not forever. At some point, everyone gets stuck.

One of the main concerns for Highland Oaks residents is getting the neighborhood kids to and from school.

Public transportation is non-existent. Southside Independent School District tried to provide school bus service to the neighborhood at the start of this school year, but had to abandon the plan after just a couple of weeks. The bus, with children inside of it, kept getting stuck in the sand.

Now the kids must trudge through the sand and mud twice a day. It’s especially challenging for the handful of children who have special needs.

It’s also nearly impossible for support services to drive through the neighborhood. School buses, garbage trucks, cop cars and ambulances all get stuck.

“We don’t have any waste management. Emergency vehicles, we can call them but they don’t want to drive on our streets since they get stuck,” said Azeneth de la Fuente, who’s lived in Highland Oaks with her young family for six years.

Maria Bernal, a Highland Oaks resident since 2003, called 911 two years ago when her baby stopped breathing shortly after midnight. The child started to turn blue as she waited for paramedics, and she performed CPR. Emergency workers arrived an hour and a half after the call because their ambulance was stuck in the sand.

In addition to paved roads, the neighborhood lacks other basic infrastructural building blocks such as sidewalks and street lamps. Packs of stray dogs – most of which are some mongrel variation of chihuahua or pit bull – bark from the edge of front yards, occasionally straying into the sand. 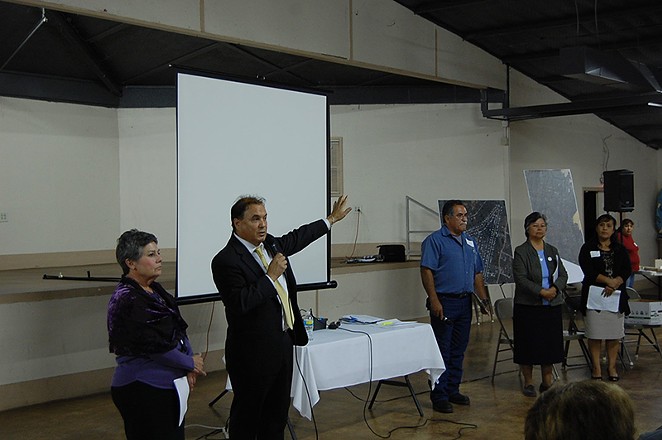 People who live in the neighborhood report a recent uptick in crime. They suspect that as word of the lack of law enforcement has spread, burglars on foot have targeted the neighborhood.

“People know that the cops and sheriffs don’t come in time,” said Morales. “It really does concern me, because I have my two girls, and my husband comes home from work really late.”

The entire situation is similar to a colonia, the impoverished unincorporated areas along the Texas-Mexico border. Although it’s in far better shape than most colonias, since few of them have utilities such as electricity, running water and septic systems, it still looks like many of the communities which Oscar Muñoz has worked with in his 15 years with the Texas A&M University Colonias Program.

Now director of the program’s San Antonio branch, Muñoz recently visited Highland Oaks and met with some of the neighborhood organizers. It wasn’t just the infrastructure that was familiar, though; the community of people willing to sacrifice for a place to call their own looked similar to the border, too.

“They do want to have their little piece of the American Dream, but they don’t qualify for downtown, so they have to buy wherever they can buy,” Muñoz said. “You’re going to have people who want to take advantage of that situation, the contractors and the developers.”

With so many problems, the most obvious question is why live in Highland Oaks in the first place?

The answer is complicated. For most, it’s the affordability. The idea of owning your own piece of property, warts and all, can be a powerful magnet. For others, living on the fringe of an urban center is attractive.

“You’re away from the city, there’s less noise,” Morales said. “It’s peaceful. You don’t have a lot of stores close by, but some ... people like living outside of 1604 and some people like to live inside.”

Ownership of the subdivision changed hands several times over the past decades. At least once it was auctioned off by the county after a developer failed to make necessary improvements, file paperwork and pay taxes, but the county insists that it has never owned the land. The roads, officials say, are private, and have always been that way.

In other words, if Highland Oaks residents want the roads paved, they’re going to have to come up with the money themselves. And it won’t be cheap.

Building streets where they’re needed could cost over $5.5 million, and adding curbs and sidewalks would cost an additional $11 million, according to estimates from the Bexar County Public Works Department.

Even though the county insists it isn’t responsible for the streets, that doesn’t stop it from profiting by auctioning off foreclosed property in the neighborhood.
Local family-owned developer KFD, Inc. has bought, developed and sold properties in the neighborhood since the ’90s. Its president, Elaine Windhorst, said the company buys most of its Highland Oaks properties at auction from the Sheriff’s Office.

It’s common practice for the county to sell property whose owners don’t pay their taxes, but Windhorst doesn’t understand how that’s legal if the county has no interest in Highland Oaks.

“My family has tried to get the county to pave the roads, and the response has been very negative. I don’t really understand why they’re not responsible,” Windhorst said. “Every time we show anybody a lot, we always tell people that these roads are not good. We have no control over when they’ll be fixed.”

Joe Watson, the county’s asset manager, explained that auctioning foreclosed property in neighborhoods like Highland Oaks is legal because even if the county does nothing for the roads, their residents still benefit from services such as the police department and other streets in the county.

But the benefits of those services are diminished if police can’t drive through your neighborhood, or your car gets stuck in the sand before you reach the main road.
For help, the neighborhood coalition reached out to Chico Rodriguez, their representative at the Bexar County Commissioners Court. 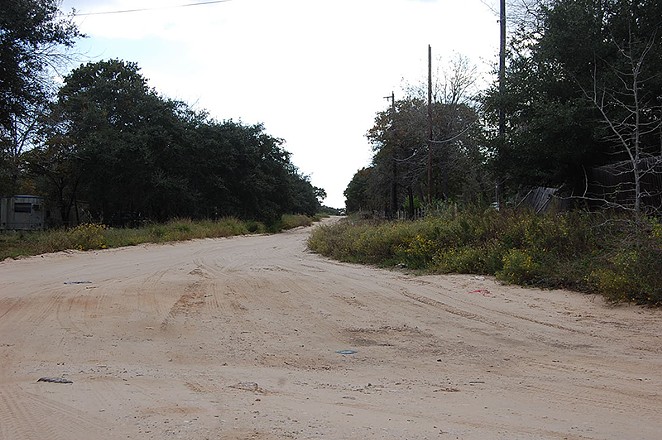 Rodriguez has represented Precinct 1 since 2005. The neighborhood coalition first invited Rodriguez to a meeting on October 8. He said he could not attend because he was at a conference in San Marcos, but he sent members of his staff. At the time, the gesture felt disrespectful to some of the residents.

“You get discouraged because you do so much work,” de la Fuente said. “We have rights as any other neighborhood. I don’t know if it’s just because we’re way out here on the South Side and they’re forgetting about us, but we’re paying taxes. I pay a lot of taxes for my house.”

Rodriguez did not respond to requests for comment for this story.

Over a month later, Rodriguez and county staff attended another neighborhood meeting, when they laid out a few possible solutions. None of them are easy.

One is to apply for a Community Development Block Grant, a chunk of money from the Department of Housing and Urban Development. But it’s tough to get the grant – the application requires income verification paperwork from every household in the neighborhood.

To qualify, 51 percent of the community’s residents must meet Section 8 income criteria, which means a family of four can bring home no more than $54,550 a year. Every household that does not turn in the paperwork is counted as over the income limit.

The application for the grant is due in January 2016. The funds would be available by October that year.

If the grant fails, the neighborhood could apply for a $5.5 million loan from HUD, which would require unanimous approval from the Commissioners Court, and would decrease funds for other projects around the county.

Rodriguez, who’s up for re-election next year, gave his support to the neighborhood at a recent community meeting. In Spanish, he told the audience he was bringing them “good news” by laying out their options for the streets. He stressed the importance of remaining united. The promises of support filled at least some of the residents with hope.