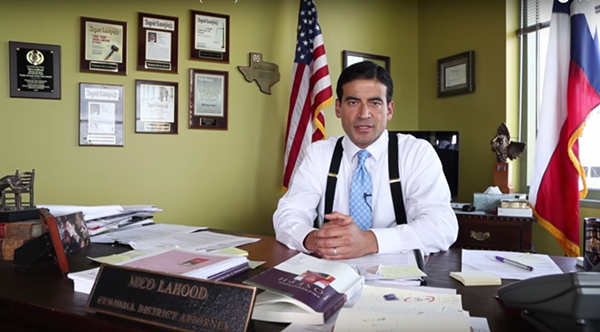 In the short video produced by the filmmakers who made Vaxxed: From Cover-up to Catastrophe, Bexar County District Attorney Nicholas "Nico" LaHood is seen in his office at the Bexar County District Attorneys' headquarters downtown saying: "I'm Nico LaHood. I'm the criminal district attorney in San Antonio, Texas. I'm here to tell you that vaccines can and do cause autism."

The teaser is promoting a series the Vaxxed producers are making that chronicles the stories of parents who claim vaccines gave their children autism. LaHood's segment, called "Vaxxed Stories: The Prosecutor Nico," airs online Tuesday.

LaHood's comments come just weeks after the Texas Department of State Health Services announced that the number of Texans exempting their children from vaccinations for non-medical reasons has risen nine percent, continuing a trend that began in 2003 when the state began allowing parents to decline immunizations for "reasons of conscience," as the Houston Chronicle reports. Concerns about students skipping out on immunizations have increased with the re-emergence of diseases like the measles and whooping cough, according to Anna C. Dragsback, president and CEO of The Immunization Project. "It's time for the community to step up and take action on this very troubling trend," Dragsback told the newspaper. However, children who aren't vaccinated, about 45,000 of them, make up a fraction of state's 5.5 million schoolchildren, according to the report. In Bexar County, about 1,500 students were unvaccinated for the 2013-14 school year, according to the San Antonio Express-News.

LaHood's public comments, which were first reported by the Express-News' Brian Chasnoff,  immediately sparked scrutiny from local media and from LaHood's Facebook followers. Critics chide that LaHood is using his prominence as the county's top prosecutor to promote a theory that the U.S. Centers for Disease Control and Prevention has repeatedly debunked. The Vaxxed documentary is largely based on a discredited study published in 1998 by a former British doctor named Andrew Wakefield that claimed the MMR vaccine, which is used to immunize kids from measles, mumps and rubella, is linked to increasing cases of autism. The CDC says there is no link on its aptly named webpage section called "Vaccines Do Not Cause Autism."

LaHood told us that he decided to participate in the short film after privately hosting a screening of the Vaxxed documentary this weekend and participating in a Q&A with film-goers who asked him questions about his two children, who LaHood says are "vaccine injured." One child, he says, has autism while the other has a skin condition that the DA says is linked to vaccinations. "It's a personal issue. My opinion was to vaccinate, but both my children ended up vaccine injured," he told the Current Monday afternoon. He said that after one son's 18-month vaccination, "we had a different child. No one can tell us he was born that way."

LaHood bristled at critics who say he's promoting a bogus conspiracy theory by saying they need to watch the documentary before dishing out complaints. He insisted he's not trying to stop people from vaccinating their children. "I just want to encourage parents to make an informed decision," LaHood told us. "Just let parents choose."

Still, Vaxxed, in LaHood's his opinion, is what parents need to see to make an informed decision on the matter. He says he used to believe in immunizations for children, but after watching the movie earlier this year, he changed his mind.

Naturally, others are concerned a prominent local official would film himself in his pubic office saying that vaccinations cause autism. Fiona O'Leary, who describes herself as an Autistic Advocate based in Ireland and founder of ART Autistic Rights Together, asked LaHood on Facebook to retract his statement and apologize, to which LaHood said, "Watch the movie." One local supporter of LaHood's questioned whether she could continue that support. "I respectfully disagree with you and you are incorrect about the scientific evidence ma'am," LaHood replied to the woman on Facebook. "We have a vaccine injured child and that's a fact, so please respect our testimony."

LaHood say he knew before agreeing to be in the short film that his comments would spark controversy. "This was not a popular decision, but I had to do something," LaHood says. "I know it's the right thing to do."