Bexar County Faces A Rise In Rain And Rabies 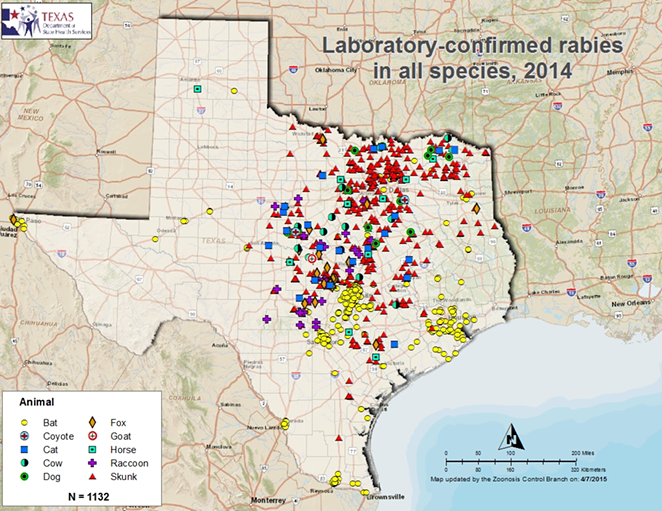 County officials issued an advisory to Northwest Bexar County after receiving confirmation of rabies in three animals: a skunk, bat and kitten, throughout the area.

The advisory urges people and household pets that may have come into contact with any wild animals over the past ten days to contact a doctor, reports KENS5. These animals might include skunks, feral cats, or raccoons.

This year alone, there have been 427 confirmed cases of rabies in animals throughout Texas. Last year saw 1132 positive rabies cases in Texas, according to several reports published by the Texas Department of State Health Services.

The report also reveals that of the 32 confirmed cases last year in Bexar County, 31 of which were bats. Williamson and Travis Counties each saw over 100 cases of rabies in bats.

Though rare in humans, rabies can be deadly. The virus is transferred from the saliva of an infected animal into humans often through open sores or a bite. After infected, the disease targets the central nervous system.

Specific symptoms that appear may include insomnia, anxiety, slight or partial paralysis, excitation, hallucinations, agitation, hypersalivation (increase in saliva), difficulty swallowing, and hydrophobia (fear of water), as defined by the Center for Disease Control and Prevention.

The most recent human infection for the San Antonio area occurred in 2009. A 17-year-old girl was infected from a bat in the area and survived the virus after a four to six week incubation period.