Bexar County Is No. 2 in Texas for Officer-Involved Shootings; Black Residents Are in the Crosshairs

Officer-involved shootings of civilians in Bexar County were the second highest of any county in the state from 2016-2019, and their frequency increased in three of those four years, according to a new report by the nonprofit group Texas Justice Initiative.

What’s more, while more white people were shot by law enforcement officers in Bexar County during that time, Black people were both shot and killed at a disproportionate rate, according to the data, which was culled from reports filed with the Texas Attorney General’s Office.

TJI’s report comes amid a nationwide reckoning on police reform and racial justice with activists calling out departments for disproportionate use of force that targets people of color.

Such issues came into even sharper focus locally when a Bexar County Sheriff’s deputy on August 25 shot and killed former Army sergeant Damian Lamar Daniels, a 30-year-old Black man, as deputies tried to detain him for mental health treatment. John A. Rodriguez, the deputy who fired on Daniels, also shot and killed another person 10 years prior who was suffering a mental health crisis, an Express-News investigation revealed.

The same day as Daniels’ shooting, San Antonio Police Department officers wrestled Black jogger Mathias Ometu into the back of a squad car on an incorrect suspicion that he was a domestic violence suspect.

“When I look at the data in this report, my deepest suspicion — and probably my deepest fear — is that we’re seeing a cultural problem inside police departments,” said Gerald Reamey, a St. Mary’s Law School professor who tracks policing issues. “It’s troubling that we’re seeing so many of these incidents in Bexar County.”

The data broken out in TJI’s report includes both numbers from each county’s sheriff’s office plus every police department operating there, offering an overview of big-city, rural and suburban departments.

A total of 72 civilians were shot by sworn law officers in Bexar over the previous four years, and 2019 marked the only one of those years that officer-involved shootings decreased, falling to 19 from 20 the prior year. Of that total, 38 of the civilians shot — more than half — died of their wounds.

Statewide, the total number of civilians shot during officer-involved incidents increased between 2016 and 2019. At the same time, the survival rate of those shot decreased, according to TJI’s analysis.

The data also shows that Black people made up a disproportionate percentage of the civilians shot by police in Bexar over that time, accounting for 13.9% of the total, even though they make up just 7.3% of the county’s population, according to U.S. Census data.

On that front, Bexar’s statistics mirrored that of other big Texas cities, according to TJI. Black civilians were overrepresented in officer-involved shooting incidents in each of the five most populous counties. 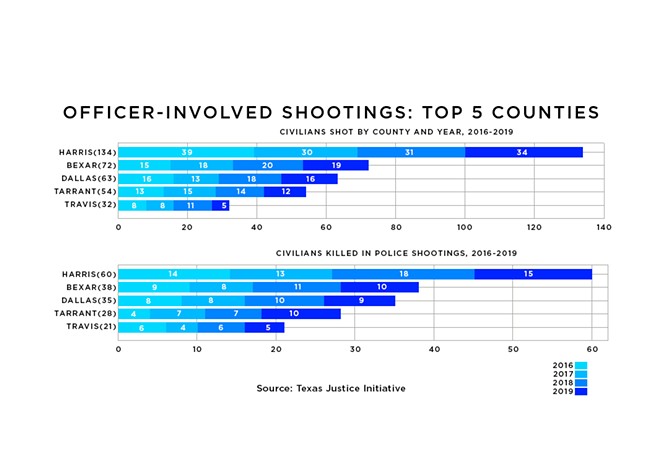 San Antonio police-reform activists say the numbers back up what they have long argued: that Black people are more likely to face violence during encounters with law enforcement. The report, they add, is more evidence that San Antonio must shift funding away from its police department and into social programs.

“This report is not just someone’s opinion or skewed to one side — this is data and facts,” said Ananda Tomas, community organizer for police-reform group Fix SAPD. “It bolsters our argument and shows that something substantial needs to change.”

Valerie Reiffert, who leads Radical Registrars, a group that works to increase voter registration, said the disparity highlighted in the report is evidence of systemic racism in police departments. Those structural issues can’t be solved through minor reforms, she said — communities need to rethink law enforcement from the ground up.

“Black people are unsafe in our own city because of how they’re treated during police interactions,” she said. “I don’t know what could make it any clearer than the recent incidents involving Sgt. Daniels and [Mathias Ometu],” she added.

TJI’s study doesn’t offer critiques of policing practices, nor does it lay blame for the rise in officer-involved shootings. However, TJI Executive Director Eva Ruth Moravec said the trends it highlights should drive analysis and debate by policymakers, citizens and law enforcement officials.

“It shows that, unfortunately, these numbers haven’t slowed down,” said Moravec, who covered criminal justice in Texas for more than a decade in the media, including a stint at the Express-News. “That’s why it’s important to collect this data, to analyze it, to pick it apart and discuss it.”

Even so, he said he’s taking note.

When reached for comment by the Current, an SAPD spokeswoman said no one was available for an interview on the study. Instead, she provided an online link to the department’s filings with the AG’s office. 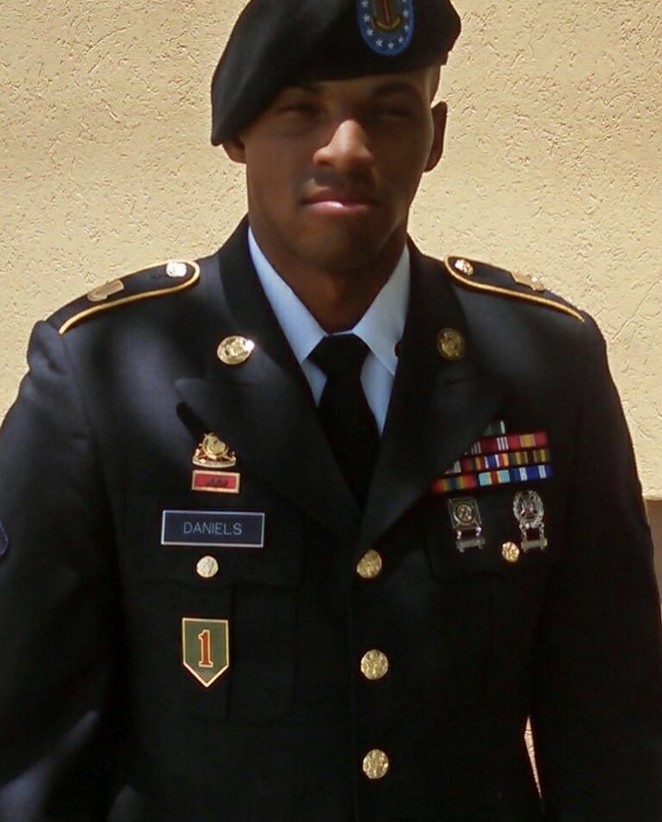 Reamey of St. Mary’s said a shift in police culture since the 1980s has likely contributed to Texas’ rise in officer-involved shootings. In addition, the departments’ purchases of heavier firepower and high-capacity magazines have made shootings more deadly for civilians.

“Between the early 1980s and now, police have adopted this belief that failure to comply is a capital offense — if you don’t comply, you could be killed or at least taken down,” said Reamey, who spent nearly three decades offering legal training for police departments. “That’s a very fatal flaw when you’re trying to deal with the public.”

The incident with Ometu, the Black jogger, ended with Bexar County DA Joe Gonzales dropping the felony assault charges filed against him for allegedly kicking officers when they forced him into the patrol vehicle. However, Reamey said the interaction could have taken a lethal turn.

“Once officers start on the path to escalation, the logical conclusion very often is deadly force,” he added.

On at least one front, there has been some improvement in the way local law enforcement interacts with the public, experts point out. SAPD has revised the way it addresses mental illness, including crisis intervention training for all cadets and establishing a special unit to divert people to treatment instead of jail.

Even so, Moravec said introducing guns into situations where someone is suffering a breakdown can be a recipe for disaster. That argument is echoed by local police-reform activists who call for shifting police funding into mental health programs.

“I know San Antonio has done a lot for homelessness and mental illness and gotten accolades for that,” Moravec said. “But there’s still a lot of discussion about whether when someone is having a mental health crisis the best person to go out on that call is someone with a weapon. In some of these cases, what ends up happening is suicide by cop.”

Sheriff Salazar declined to discuss specific details of the Daniels shooting since it’s still under investigation. However, he said reducing officer-involved shootings during mental-health calls isn’t as simple as dispatching social workers instead of cops.

Even so, Salazar said increased training, including in de-escalation tactics, can help reduce the number of officer-involved shootings.

To that end, he doubled the number of in-service training hours required of his deputies after becoming sheriff, raising the total to 40 a year. He also instituted a new ethics policy, which extends to the handling of calls, and has put more focus on the mental health of his deputies.

Part of the problem, they argue, is that cops have been conditioned to see violence as a key tool at their disposal.

“I don’t care how much training [a department] requires for its officers, the training is part of the problem,” Tomas of Fix SAPD said. “It pushes the idea that every interaction with the public is a life-or-death situation, and that isn’t the case.”