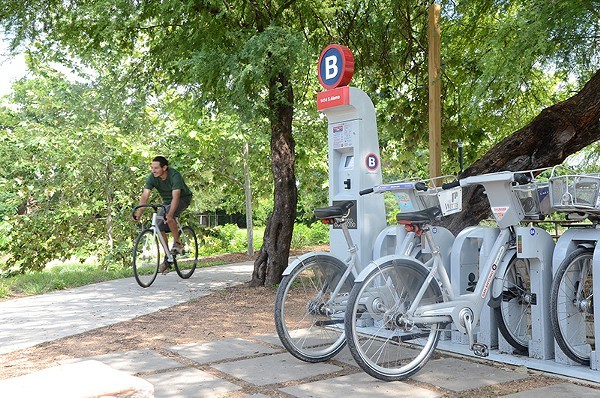 With questions looming on how to balance expanding B-Cycle in San Antonio with funding the nonprofit bike-share program's needs, Bexar County Judge Nelson Wolff is floating a fresh idea.

In a June 1 letter to VIA Chair Hope Andrade, Wolff asks her to diversify the transportation agency's options by adding B-Cycle to its multi-modal transportation system.

"With VIA's mission to strengthen regional mobility, development and sustainability by providing an outstanding multi-modal transportation system, Bcycle would be a perfect fit with its 55 stations, 450 bicycles and 2,893 members," Wolff says in the letter.

B-Cycle is a national nonprofit that operates a bike-share program in San Antonio. At its mid-year budget adjustment, the City of San Antonio approved $120,000 in funding for the program through hotel and energy efficiency taxes.

The money will be used for hiring a new executive director and to prepare for a sustainable expansion of the program. The funding infusion came after unpaid executive director Cindi Snell announced she was resigning, citing the lack of a corporate sponsor and city funding.

Wolff believes VIA can offer B-Cycle the infrastructure it needs to grow.

"Bcycle could be integrated into VIA's transportation strategy by including stations at bus stops and at The Grand, the eagerly anticipated multi-modal center," Wolff says in the letter. "With bike racks on the busses, VIA will have the ability to take Bcycle into neighborhoods, along linear creek ways, into parks, and reach the suburban hubs of La Cantera and the Alamo Quarry Market."

Wollf also dangled a carrot in front of VIA at the conclusion of his letter.

"The VIA Bus Pass Program is funded in the amount of $191,413, which reflects a 10.4 percent increase from FY 2013-14 estimates," Wolff says. "If VIA is able to include Bcycle in their multi-modal system, the County would consider similar funding to VIA for use of Bcycle by County employees."