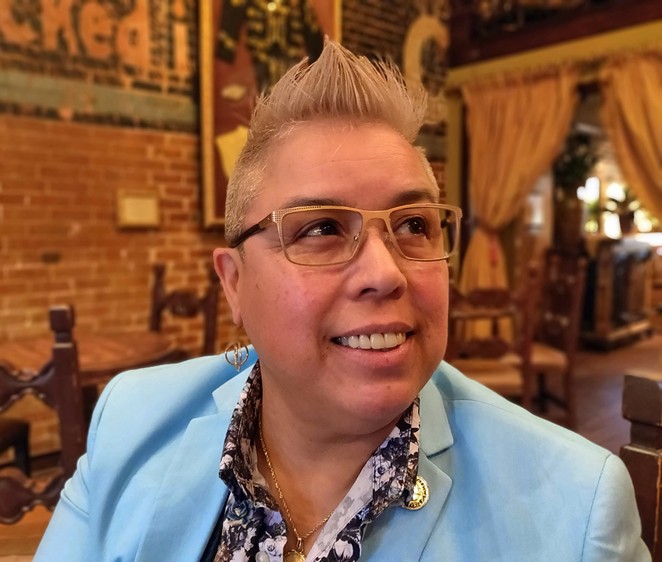 The brightly colored dishes spread between Judge Rosie Speedlin Gonzalez and I at Mi Tierra Restaurant match her flamboyant aesthetic. She’s wearing a sky-blue jacket, dangling earrings and stylistically varied bracelets that draw my attention to the vibrant tattoo on her forearm.

Though people in San Antonio’s LGBTQ+ community recognize the Brownsville native as a longtime advocate and leader, many locals first got their introduction to Speedlin Gonzalez when she was elected judge for Bexar County Court at Law 13.

Last year, the bilingual Democrat became the first openly gay judge to be elected in Bexar County, earning 57 percent of the vote in part of the blue-wave pushback at President Donald Trump.

“[Being on the bench] is a much more sedentary existence,” Speedlin Gonzalez says. “It’s been six months, and I already feel like my health is taking a hit because I’m sitting for so long.”

She’d run for office before, but the third time was the charm.

In 2010, Speedlin Gonzalez, who has a background in social work and family law, was endorsed by the Victory Fund in her unsuccessful campaign for judge of Bexar County’s 436th District Court.

Four years later, Speedlin Gonzalez undertook her first campaign for the seat she now holds. Out of the handful of Democratic LGBTQ+ candidates running that year, she was the only one to make it to the general election, although Republican opponent Crystal Chandler ultimately won the seat.

Undeterred, Speedlin Gonzalez continued to seek office — and made headlines along the way.

In 2015, over a two-month period, she was hired and fired a total of three times as Von Ormy’s city attorney. And, when the U.S. Supreme Court handed down its ruling on marriage equality later that year, she became an ordained minister and offered to marry same-sex couples at no cost.

In recent weeks, Speedlin Gonzalez has again popped up on news feeds, this time for her role in creating a pilot drug court she hopes will decrease domestic violence by interceding when people enter the criminal justice system with a drug or domestic violence charge.

Though Gov. Greg Abbott signed off on the program, his blessing didn’t come with the necessary funding. So, Speedlin Gonzalez is making the rounds herself to drum up the $1 million to finance the court, which would provide supervised drug treatment.

So far, she’s received a pledge of $100,000 in grant money from Bexar County Judge Nelson Wolff.  She’s also garnered the support of District 2 Councilwoman Jada Andrews-Sullivan, who has asked the city to assist. Andrews-Sullivan is a survivor of domestic violence.

Bexar County has a high number of reported domestic violence cases. Among its tragic statistics is the sister-in-law of Precinct 2 Bexar County Commissioner Justin Rodriguez, who was murdered, along with her 11-year-old daughter, in 2018 by a man she was dating.

Speedlin Gonzalez has come under fire from conservatives for displaying an LGBTQ+ flag in her courtroom alongside the Texas and U.S. flags. The flag was a gift from the local LGBT LULAC council. She’s still waiting to hear back from the State Commission on Judicial Conduct on whether it can stay.

I ask how being on the bench has changed her.

“It definitely has made me more mindful,” she says, adding that as an attorney, her role was to advocate and make sure her client’s voice was heard. That role, she says, has been completely reconfigured.

“As a judge, your role is not to advocate, activate or motivate. Your role is to ensure that justice is done,” she says. “In very simple terms, a judge is an umpire. We call balls. We call strikes and, when necessary, we call fouls. And we keep everybody honest in court and make sure the victim’s voice is heard [and] that the defendant’s rights are not trampled on.”

Speedlin Gonzalez acknowledges that some leave the courthouse feeling that they were denied justice. But she believes justice may arrive for them some time after that appearance in court.

“I always used to tell my clients, ‘It’s gonna be what it’s gonna be today. I always leave it in God’s hands. And just remember, God’s clock ticks at a different pace than our clock.”

She adds: “It was very hard to get that idea into [the minds of] folks who are in the emotional throes of the battle of their lives.”

“[Now], I feel like I can help a lot more people from the bench, as opposed to one client at a time.”