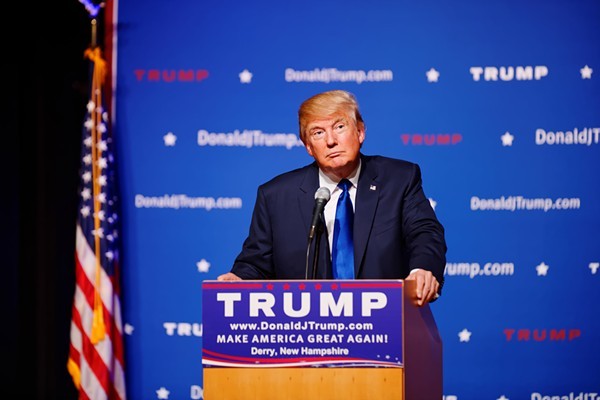 The head of the Bexar County Republican Party forgot what day his party’s presidential candidate is coming to town.


“Yeah, he’s coming to the Grand Hyatt Hotel on Wednesday," Robert Stovall told the Current when reached by phone to discuss next week's campaign stop.


With just a month until election day, it appears that the county’s most active Republicans haven’t given much thought to their candidate’s San Antonio visit. The private fundraiser for Donald Trump is absent from the local party's jam-packed events calendar, any of its social media accounts, and active blog.


Stovall said he got an invite to the event, but has no idea what other local Republican donors will be attending the private fundraiser—aside from the two hosts, Dennis Nixon and Eugene Powell. Nixon and Powell also coordinated Trump’s June fundraiser in San Antonio.


“They’re usually different from the people who contribute to Bexar County elections, so I don’t know,” he said. “They tend to fly under the radar.”


An article published earlier today by the San Antonio Business Journal listed nearly 20 of the county’s most generous donors to the Trump Victory fund in recent months—collected through a simple search on the government's Federal Election Commission website. The list includes Co-CEO of the San Antonio Spurs, Julianna Holt, and Scott Petty Jr., CEO of Petty Business Enterprise oil and gas exploration. Many on the list have contributed to candidates in both county and state elections.

Stovall also said he was unsure how many people will attend because of the price—admission costs between $250 (for "young professionals") and $100,000.


Former Texas Governor Rick Perry, who famously called Trump “a cancer on conservatism” last year, and Lt. Governor Dan Patrick, Texas chairman for the Trump campaign, have said they will be attending the fundraiser. Stovall guessed that the Chairman of the Republican Party of Texas, Steve Munisteri, might also show up.


Trump’s Tuesday fundraiser coincides with the last day to register to vote for the November 8 election. But it seems like the significance is lost with Bexar Republicans. Is Trump planning on doing anything else during his stop or visiting other Texas cities?