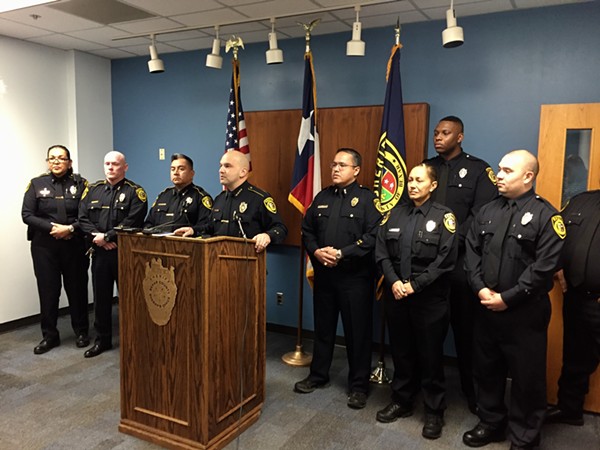 After two inmates in the Bexar County Jail committed suicide in October, Sheriff Javier Salazar announced a new unit within the department Monday to prevent more from happening.

The Detention Mental Evaluation Team, or D-MET for short, is comprised of four veteran detention officers, who will begin “high-speed” mental health training to be able to assess which inmates may be at risk for suicide.

“This year, unfortunately, we’ve had two to date. Two suicides in our jail. That, as far as I’m concerned, is two too many. It’s something that we just can’t allow to happen … if you’re not doing everything that you possibly can, you’re really not doing as much as you need to,”  Salazar said during a Monday press conference.

The team will be training with outside agencies, including the San Antonio Police Department’s Mental Health Unit and the University Health System, and visiting county detention centers throughout state to learn how they deal with at-risk inmates. Salazar also noted that, aside from the new specialized team, the department has expanded their training regarding suicides in the jail, and they’ve begun to enlist the help of family members of inmates, asking them to communicate with the department if their loved one’s demeanor seems off during video visitations.

“[The team] will be deployed among the detention center, moving around freely about the facility, making sure that we’re paying special attention to our inmates that… may have some sort of conditions that are present that may make them more liable to attempt suicide,” Salazar said about the new team.

According to Salazar, the move to improve mental health resources for inmates in the county’s jail is possible because of an “aggressive recruiting campaign” that has filled upwards of 100 openings over the last couple of months.

Manuel Medellin, a veteran deputy who has been with the department for 18 years, will be one of the members of the new unit.

“When you’re working with these guys, you have to have a little bit of empathy with them, because the majority of the guys that come through here are not always criminals,” Medellin said. “A lot of times, we get criminal trespass, or we get guys who are sick and need to be placed in the facility.”

Last year, five inmates committed suicide in the jail within the span of a month, prompting a surprise inspection by the Texas Commission on Jail Standards, but inspectors “didn’t find any issues.”

The D-MET team will begin their roles in the detention center immediately, “aggressively seeking out folks that may be more prone to [suicide],” according to Salazar.