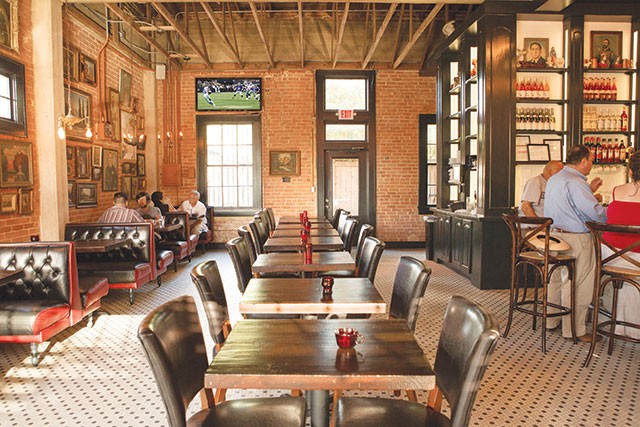 I’m not much for sports: I’ve been known to confuse a field goal for an end zone; and up until a few years ago, I was fairly certain the blue and yellow down markers were actually on the field.

Yet every once in a while as social engagements will have it, I have to muster as much of my attention span as possible to sit through a sporting match —and I’d rather it not be in some dingy, bro-ified house of wings.

As the Longhorns take on the Ducks (yes, I had to Google Oregon’s mascot) next Monday, December 30 during the Valero Alamo Bowl, I’ll likely have to find a suitable screen to take in the game with enthusiastic Texas fans as they bid adieu to UT’s Mack Brown with all the other schmoes not lucky enough to watch the game unfold inside the Alamodome.

Here’s a rundown of a few non-sports bars where you can take in a quality bar snacks, a smooth cocktail or craft brew and feign paying attention to whatever’s happening on the screen.

Barbaro
2720 McCullough, (210) 320-2261, facebook.com/barbarosanantonio
Barbaro owns up to its laidback pizza place persona and will turn on the telly for big name sports. You’ll find equal parts delicious pizza (the muffaletta with diced olives, cured meats and plenty o’ cheese was a recent fave) and fun salads along with pickled veggies, cheese plates and Bakery Lorraine-produced desserts—meaning you don’t have to fill up on less-than-awesome bar fare. What’s a game without booze? The full bar cranks out classic cocktails and Barbaro house concoctions such as the Man About Town and the Toronto. Better still is the small, but fierce, wine list curated by Chad Carey and company. Craft beer fans will be happy to know they can enjoy a pie with rare brews available on draft, but get there early—the brew lineup changes dramatically day-to-day.

Max’s Wine Dive
340 E Basse Road, Ste 101, (210) 444-9547, maxswinedive.com
Hear me out on this one. While it may be company policy to not turn up the volume on the TV sets (I hear that volume control is up to the manager’s discretion, so there’s that), the bar area at Max’s is still a great place to watch the game. This one’s for folks who are just interested enough to keep track of the score, but want to enjoy great bar snacks and a solid selection of local craft beers available by the can and bottle (no taps) and, of course, wine. The fried-to-order famous Southern fried chicken is a must-have, but don’t overlook the Texas Haute Dog, a gargantuan chilidog a la Max’s.

Stonewerks Big Rock Grille
Multiple locations, stonewerks.com
With locations at the Rim, Lincoln Heights and the Vineyard, the San Antonio-based chain is the safest bet for pleasing multiple palates. The menu is massive, if standard (artichoke dip, anyone?), and I can’t guarantee that the atmosphere won’t be tinged with a slight whiff of Axe body spray. But if you’re looking to accommodate a group, Stonewerks’ full bar, 40 beers on draft and almost as many bottles (including Texan favorites Shiner, Karbach, Live Oak and Ranger Creek) make the chain more than ideal for game-viewing.