'Beyond the Hills,' flesh vs. spirit in a Romanian convent 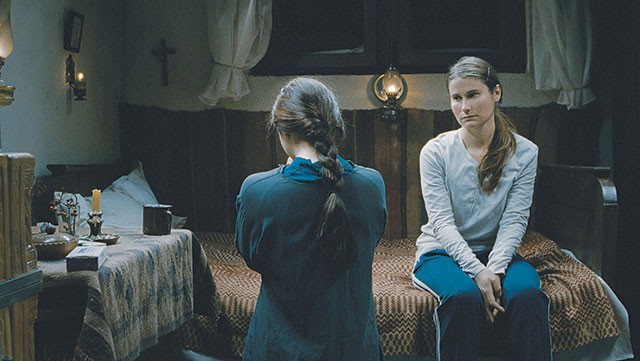 A connoisseur of female desperation, Cristian Mungiu won the Cannes Palme d’Or in 2007 for 4 Months, 3 Weeks and 2 Days, the story of a young woman who struggles to obtain an illegal abortion in Nicolae Ceauşescu’s repressive Romania. In Beyond the Hills, a true story of catastrophic exorcism, Mungiu depicts two young women driven by loneliness, one into the arms of the church and the other into violent frenzy.

Thrown together in a Romanian orphanage, Voichita (Cosmina Stratan) and Alina (Cristina Flutur) became best friends and eventually lovers. When Alina went off on her own to a job in Germany, Voichita, forlorn, found solace in a wretched rural convent that even the local bishop refuses to consecrate. Beyond the Hills begins with Alina’s return. Though she expects a joyful reunion and looks forward to taking Voichita away with her to where the two can live happily ever after together, her reception is cool. “Do you still love me?” Alina asks. Voichita does, but not in the same way as before, and she loves God more. “With God, I’ll never be alone,” she assures Alina.

The setting — primitive facilities lacking electricity, heat, and running water — is an affirmation of faith by the nuns and the stern Orthodox priest (Valeriu Andriuta) who is their spiritual leader. It is so frigid inside the church and the residential cells that the breaths of the faithful are visible as they go about their daily tasks. Alina is incredulous, and increasingly frantic, at the realization that her beloved Voichita has chosen to seclude herself with a peculiar band of religious ascetics. “Will you stay in this cave your whole life?” she asks. Mungui’s exasperatingly long takes and redundant scenes make a viewer, too, feel trapped. The hospital and the government office in which additional desolate scenes are set are also sites of ignorance, incompetence, and squalor.

Beyond the Hills (Dup dealuri)