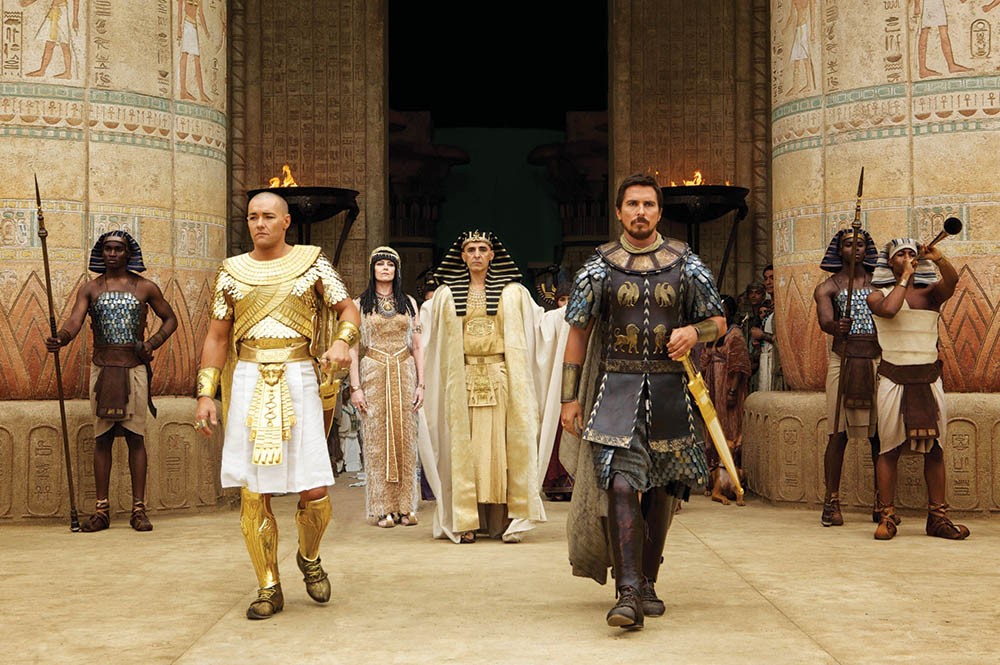 Ridley Scott has a history of fumbling with and missing the mark on sweeping historical epics. 1492: Conquest of Paradise, Kingdom of Heaven and Robin Hood were all criticized for lacking depth and racial/cultural sensitivity. Scott might be better suited for films set in the future (see Blade Runner) because Exodus: Gods and Kings was equally troubling yet admittedly entertaining.

In advance of its December 12 release, Exodus solidified its place as one of the most controversial films of 2014. The casting decisions in this movie were god awful, to put it nicely. When Christian Bale is cast as Moses, and Sigourney Weaver and Joel Edgerton are cast as Egyptians—your film is clearly missing the mark. Hollywood has a regrettable history of whitewashing, and it's troubling to see the practice continue. We've regrettably watched Burt Lancaster in Apache, Mickey Rooney in Breakfast at Tiffany's and Ben Affleck in Argo, and Exodus perpetuates Hollywood's brand of racial invisibility instead of working to end it.

If we can put the film's glaring failures behind us, and it's understandable if you can't, Scott and Bale deserve credit for a complicated portrayal of Moses. Their Moses initially rejects religion and views faith as a precursor to fanaticism until he suffers blunt trauma to the head. During his incapacitation, he speaks with God (an 11-year-old Isaac Andrews) next to a burning bush and is convinced to exercise the wishes of his newfound savior. Bale recently received flack for describing Moses as barbaric and schizophrenic but I think these beliefs successfully bleed into his performance. Always a captivating and massively talented performer, Bale's Moses is dangerously psychotic—yet, against any form of reason, frees a large population of enslaved people. Exodus gives the audience a chance to question the story of Moses as just a story.

In true Scott fashion, Exodus is visually and aurally stunning. Although I'm not a fan of the 3D experience, the filmmaker's deftness at world-creating is undeniable. During the depiction of the ten plagues, the audience is forced to watch as children silently die at the hands of an invisible villain (God) and the scene terrifies in a way that only a Scott creation could. From the clanking jewels dripping from Ramses' body to the horror of the ten plagues to the sound of the Pharaoh's bare feet sweeping across his bedroom floor, Scott seats the audience firmly in his version of ancient Egypt.

As an admitted Scott apologist, I want to say that Exodus is fun because it has exciting action sequences and an interesting performance from a talented actor. Unfortunately, Exodus has too many issues that are impossible to ignore.

Ridley Scott may be recognized for his 1979 sophomore release, Alien, but the director should be renowned for the entirety of his career.

Scott was involved with some of the most inventive television advertisements of the 1970s. His commercials, "1984" for Apple and "Boy on Bike" for Hovis, gave audiences a sneak peak at the work of an artist who soon would become one of the most recognized directors of the late-'70s onward.

After directing more than 2,000 commercials and solidifying himself as one of the most prolific advertisers of the era, Scott went on to direct his first feature film, The Duellists, which won the Jury Prize for Best First Feature at the Cannes Film Festival.

Known for his visually stunning set design, Scott is a builder of cinematic worlds, a master of set design and a magician behind the camera. Perhaps more importantly, Scott works only on projects he cares about—a rarity for any filmmaker in the age of blockbusters. Stephen Moss of The Guardian put it nicely when he said, "Scott is a throwback to the studio system in which directors such as Howard Hawks and Michael Curtiz, working fast on projects they hadn't originated, could produce terrific films. He is not an auteur, but he is far more than just a technician."

He may have taken flack for some casting decisions in his most recent release, Exodus: Gods and Kings, but anything Scott directs is worth a shot.