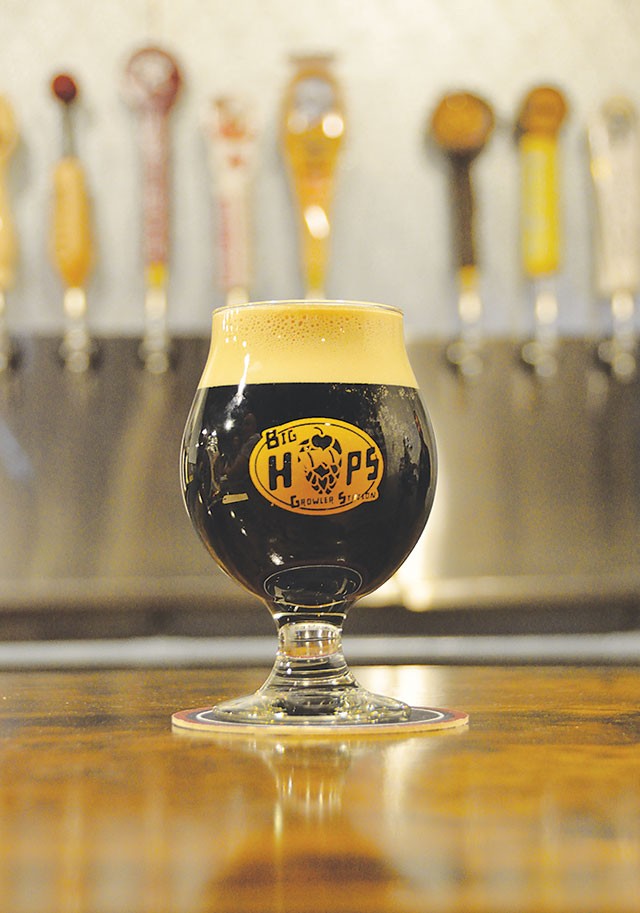 By now, word of Big Hops Growler Station has filled the ears and mouths of many in San Antonio. After opening just 10 months ago, owners Rob and Kylie Martindale quickly realized they had struck gold—not the black gold so often revered in Texas, but the liquid variety consumed by the pint all over the world. What’s not appealing about stopping by to have a pint and being able to leave with a jug (or “growler”) of your favorite malted beverage?

Since opening, Big Hops has seen such a steady flow (with some days packed to the gills), that the Martindales felt San Antonio could easily support another location. Fast-forward to early this month when Big Hops opened their second location at 11224 Huebner, just around the corner from Freebirds.

The Huebner location will carry 32 taps of various ales and lagers, with sodas to follow.

Some familiar faces from the Broadway location can be seen at Big Hops Huebner, and some new ones. “Were like a family here,” says Aug Aranda, one of Big Hops’ original bartenders, “including our regulars.”

Two locations in one year is already huge, but it doesn’t stop there. Something big is on the horizon: Big. Hops. Gastropub. The Martindales have partnered with local engineer and music editor Jim Clements (who also partnered with the Martindales on Big Hops Huebner) to open Big Hops Gastropub on the Northeast side of San Antonio in the location formerly occupied by The Tap Exchange Alehouse and Grill at 22250 Bulverde, which closed its doors a few months ago. With only a World of Beer and Spec’s in the area, it’ll be just what the far Northside beer lovers have needed for a while.

The new venture looks to have around 50 taps of liquid libations—about two-thirds Texas and one-third national, with at least two taps devoted to wine (yes, wine) and a soda or two for the kids. The Bulverde location should continue Big Hops’ muted décor, with now-standard wainscoting and an earth tones palette.

The set menu, and rotating pub specials, will come with a twist, according to the owners. “We plan to let our customers have somewhat of a say in how their food is prepared,” says Martindale, “for example, if you order fish ’n’ chips, you’ll get to choose which beer you want to have the fillet battered in.”

All menu items will be prepared fresh in-house, with ingredients sourced locally whenever possible, and will include kids menu items as well.

“We’ve hooked two of the hottest up-and-coming chefs in San Antonio,” says Martindale, who was able to lure Rico Torres and Diego Galicia from their recently opened restaurant Mixtli to help Big Hops get their gastropub going. Working with Big Hops isn’t anything new for Torres (whose background is in catering) and Galicia (whose experience is in restaurants both in the U.S. and Mexico). Before opening Mixtli recently, the pair of chefs held sold out pop-up dinners at the original Big Hops.

Galicia and Torres look to take pub food to a new level. “We want people to come for the beer, but stay for the food,” said Galicia, adding, “We want to match the food with the beer, not the other way around.” The chefs plan to focus on snacks and tapas-style fare that will complement Big Hops’ laid-back vibe. This will allow them to be aggressive with the menu quality and focus on creating synergy between the flavors in the suds with that of the food.

Big Hops Gastropub is slated to debut in late January and will be open seven days a week with specific hours of operation pending. I have feeling epic times are ahead.