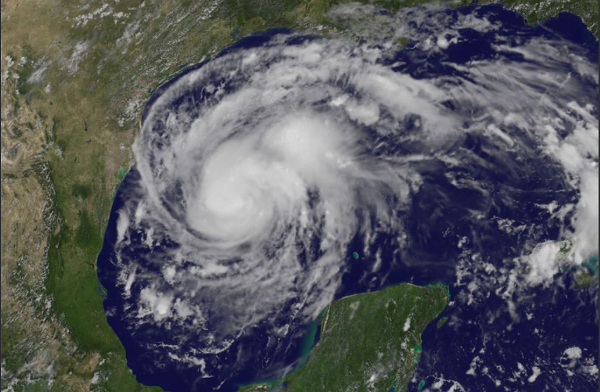 What was a mere "tropical depression" on Wednesday has quickly turned into a grown-ass, potentially life-threatening hurricane. The National Hurricane Center has now predicted that Hurricane Harvey, the storm brewing the the Gulf of Mexico, will the Texas shores Friday night with 125 mph winds, drenching the coastline from Corpus Christi east to the Louisiana border with up to 2 feet of rain.

The NHC predicts Bexar County will be hit with up to 10 inches of rain over the weekend, and the county's officially under a flash flood warning. Monica Ramos, a county spokeswoman, said that public works crews are preparing for heavy flooding  — especially in the city's south side — by  monitoring creeks, drainage ways, and low water crossings as the storm grows near.

Some hurricane experts are already predicting a storm for the history books. Like Marshall Shepard, former president of the American Meteorological Society, who dramatically tweeted: "Trying not to be dramatic, but I fear epic flood catastrophe."

Mandatory evacuations have already been ordered for Rockport, Port Lavaca, Port Aransas and Aransas Pass, along the Gulf Coast. Gov. Greg Abbott has issued a state of "imminent disaster" for 30 counties that lie in Harvey's path. According to Reuters, oil and gas companies, including Exxon Mobil and Royal Dutch Shell, have halted production and are evacuating employees from their facilities in the Gulf of Mexico.

Texas hasn't been hit by a hurricane since 2008, when Hurricane Ike tore through Houston. While Ike ended up being less destructive than expected, thanks to a last-minute change of course, it was still caused some $30 billion in damage and killed at least 74 Texans. Meteorologist and scientists in Houston say the region's still dangerously ill-prepared to the next "monster" storm — especially since the city's home to a major transportation hub for crude oil (and dozens of other top imports). Houston Congressman Pete Olson told ProPublica in March 2016 that if a hurricane hits Houston in the right spot, “it’s going to kill America’s economy.”

According to the feds, the last "major hurricane" to hit the U.S. was Wilma in October 2005.

An update from City of San Antonio & Bexar County on Hurricane Harvey: