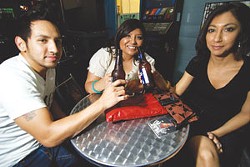 
The downtown cycling scene has never really had a bar to call its own. For a while, people would park their bikes in the back of Beethoven’s and drink pitchers of Spaten after a group ride, or occasionally hang at Acapulco Drive Inn or the Texas T. But for various reasons, none of those options proved long-term. Then what to make of the Pedicab, a brand-new bar located in the shadow of La Tuna?

The Pedicab’s owner, Michael Urbano, is a transportation impresario. He owns a downtown Segway and pedicab company, and he worked for years as a New York City taxi driver. Clearly, transportation is in his blood.

The bar had just opened a few days berfore the Bar Tab crew peddled in, and Urbano’s still trying to work out the kinks. He mentioned doing away with the front parking lot and making it into a large, cyclist-friendly patio. This would be a good idea. Cyclists like to hang out as close to their bikes as possible when drinking at a bar because not everyone brings a bike lock; people have expensive bikes they want to keep an eye on; and, most importantly, you never know when you’re going to need to explain to a fellow cyclist the specifics of your kick-ass new bike component.

As it is now, the Pedicab’s interior is huge and the air conditioning is ice cold. Urbano offers a diverse selection of quality beer, with at least 50 different bottled brews at happy-hour prices: $2 for domestics, and $3 for imports. Urbano hopes to get the selection up to 100, which would be a great asset. Another interesting feature is the widescreen YouTube video jukebox. With a remote control, patrons can choose from a huge selection of music videos. When we went, a small group with a Rick Springfield fixation was monopolizing the screen.

Perhaps the most interesting part of the Pedicab is the pedicabs. Urbano told Bar Tab that his drivers would soon be able to make beer deliveries for people in the Southtown neighborhood, accompanied by finger food from his grill (mostly fajitas and tacos), or full-on entrées from neighborhood restaurants. With the bar’s vast inventory, and Southtown’s excellent restaurant row, this could keep many parties going well into the night. Like we said, the Pedicab still has some work to do, but they’re clearly heading in the right direction.

THE VIBE Under development, but showing promise with cold AC, an extensive bottled-beer selection, and plans for beer and food pedicab delivery

BEST USE A brewhouse world tour, from the comfort of your seat; party reinforcements