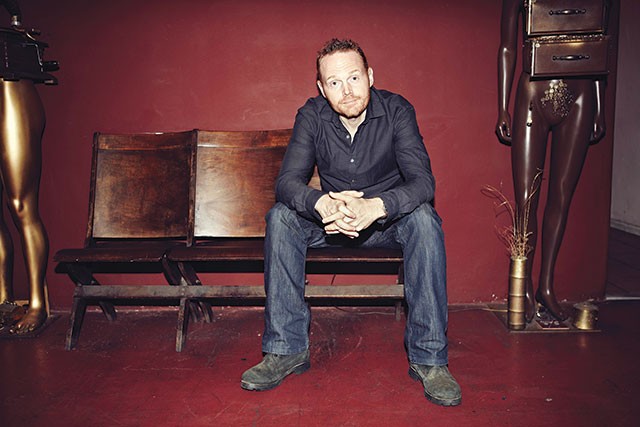 To AMC addicts, Bill Burr might be best known as the henchman Kuby, a recurring character on Breaking Bad. To many comedy fans and comics, Burr is a living legend, one of comedy’s most fearless and effective truth-tellers in the Bruce/Carlin/Pryor/Hicks tradition. Like his late friend Patrice O’Neal, Burr seems to accept a priori that politeness and “political correctness” (whatever the hell that means in 2013) have no place in comedy, but his unpopular points are hilariously difficult to dispute. His defense of “great men” like Arnold Schwarzenegger who’ve fallen victim to the “epidemic of gold digging whores in this country,” for example, would probably be the subject of countless blogosphere takedowns if it weren’t so perplexingly thoughtfully argued. Burr, sounding calmer than he ever seems onstage, discussed his act in an early morning telephone interview.

Releasing your latest special through the internet [last year’s You People Are All the Same is available to stream on Netflix Instant or as a purchasable download at billburr.com] probably gave you more creative control than you would have had with a TV network, but did the fear of being taken out of context on blogs or social media sites come into play at all when you were deciding what material to use?

No. I mean, how do you take a joke, how do you take a comedian, out of context, where all of the sudden you just go, “Wait a minute, did he really mean that?” … Somebody watches a comedian for 40 minutes, and is laughing, and then all of the sudden a topic comes around that’s in their world, and then all of the sudden the comedian’s being offensive. I disagree with that. I say the audience member’s being selfish, because everything else was funny, and you didn’t care until it came to your neck of the woods. Now all of the sudden, you don’t have a sense of humor. It’s hilarious. Then they go home and they write a blog about it, like they’re some stenographer. A lot of times people come up to me at the end of the show, and they go “Oh my god, that bit you did about the mortgage crisis, oh god that was hilarious.” And I go, “That wasn’t me, that was the other guy.” … Not only do they not really remember what you said, half the time, they don’t even remember who said it.

Unlike a lot of comics who rant, you seem to undercut a lot of what you say by telling people that they shouldn’t listen to you after you make a point. How did that develop?

The reason I say “I’m an idiot,” or whatever is because I realize how little I read and how I only have access to probably .01 percent of the information I need on whatever sort of topic I’m discussing, unless it’s my personal life. If I’m going after a bigger topic, I don’t want to be that person standing there going “I have all the answers. I’m this all-knowing being.” ‘Cause I’m not. There’s a lot of stuff going on in the world, and I miss most of it. But that doesn’t stop me from talking about it. … Once you get into your 40s, if you’ve done any sort of self-examination, you kind of realize how full of shit you are.

How do you generate material?

I just start with one funny idea, and I go up and I just start talking about it. … Everybody has that skill. If something funny happens to you as a non-comedian, then you go back home or you go to a bar and you tell your friends the story. You haven’t written it down and memorized it and practiced it in, like, 12 other bars before you walked into that bar. You just walk in and you tell the story, because you’re relaxed and comfortable and around your friends. … You have an ability to think in the moment and express it, but It’s an out-of-body experience when you go onstage and everybody’s staring at you. Self-consciously, you stop being yourself, and you overthink things. … There’s a spotlight on you, you’re holding a microphone, you’re walking around, there’s a bunch of strangers listening to you, and it’s this weird experience, and it causes you to go into this mode of “Now, I’m Bill doing stand-up.” The battle that you fight your whole career is trying to get as comfortable as you are in a bar with your friends onstage.