Bill White at Woodlawn Lake for Fourth of July

Well stripe my stars, Democrat Texas gubernatorial candidate Bill White will be maxin' and relaxin' at Woodlawn Lake tomorrow. Don't know if he'll stick around for the fireworks, but according to local White field manager Jorge Urby, White will take part in speeches slated to start at 1:00 p.m.

Meanwhile, across downtown, current Gov. Rick Perry will be tuning his axe to join brother-from-another-mother Ted Nugent in a totally epic rendition of "Cat Scratch Fever" during the Nuge's 4th of July show at Backstage Live. Just kidding, although if you're looking for a Perry appearance in SA this weekend, that show is probably your best bet. 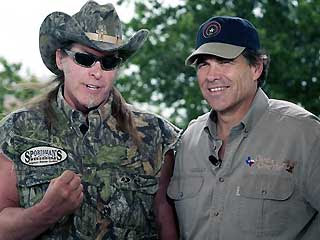