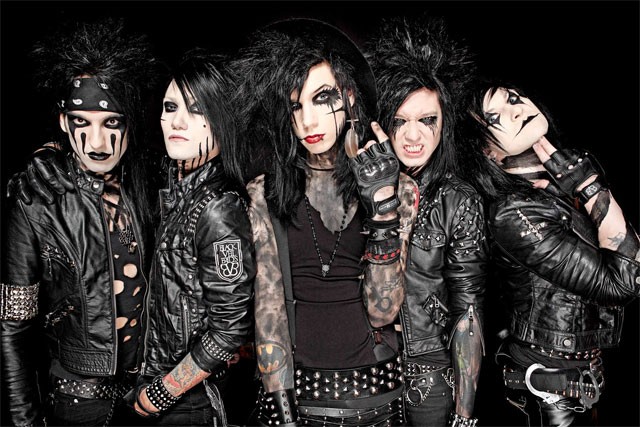 Andy Biersack, vocalist and songwriter for L.A.’s Black Veil Brides, has never lacked for ambition or self-belief. But even he has to admit he’s enjoying a unique feeling about Wretched And Divine: The Story Of The Wild Ones, the band’s third album released January 8.

“This is the first time in my life that I’ve been so pleased with an album,” he said in a mid-December phone interview. “I just want to bring this record on tour, bring it around the world and let people hear it.”

Biersack was determined that this would not be just the next Black Veil Brides album. He wanted to show that not only could the band live up to the standard set by 2011’s Set the World on Fire, but surpass it. On a flight to Europe while on tour, Biersack began to conceptualize an album that would take the music of Black Veil Brides to a whole new level. He started to sketch out a story that would describe a disturbing future in which a unified church government was using drugs to turnthe youth into drones — making them refugees that Biersack named “The Wild Ones” — in an attempt to remove science, creativity, and any independent thought from its young citizens. The story follows the Wild Ones’ efforts to defeat the government’s plans and, in the process, their own fears.

“I think the whole process was definitely trial and error, figuring out what worked for the story and how could we make the album big, have this grand feeling and be like the soundtrack to a film that’s our own movie,” Biersack said.

Wretched And Divine is a progression, but it doesn’t abandon the darkly hued, melodic metal sound of the first two CDs.

“I think this is an album that feels really natural to us, the greatest thing we could do and the best possible move we could make as songwriters or as musicians,” he said.

Black Veil Brides is wasting no time getting out on tour behind Wretched and Divine, beginning a tour January 4 that will run through January 30 before the band heads to Europe for a two-week run. Then it’s back to the states for another three weeks of shows beginning in mid-February.

The band wants to showcase the new material, but since Wretched And Divine will be brand new, it won’t weight its show too heavily toward the new album.

“We want to try to get as many of the new songs in there as possible,” Biersack said. “We’ll probably wind up doing five or six new songs on this tour just because I think the new record is much more indicative of how we feel musically than anything else. We’re also going to try to dip into our back catalog and do some stuff from the first record that we haven’t done in a long time.”