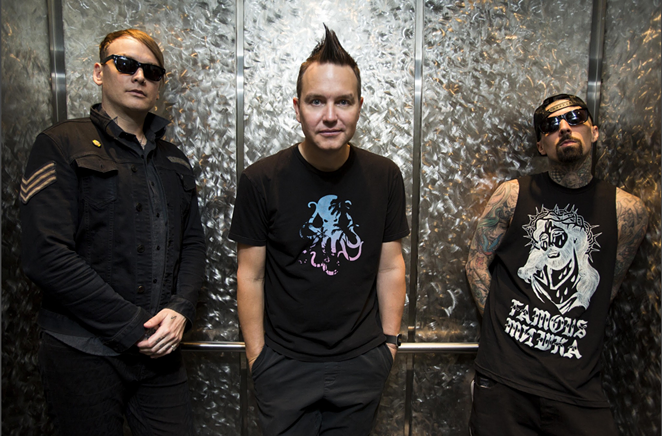 Although the group that united the jocular frat boys and the pop-punkers has lost one-half their often hilarious, ever-juvenile frontmen – the nasal Tom DeLonge – fear not, revelers in jokes of fart and testicle, Alkaline Trio's Matt Skiba has stepped in to hold down guitar and half of the vocal duties, shared with bassist Mark Hoppus.

In an interview with Rolling Stone, released Wednesday, April 27, DeLonge discusses his "awkward" sort of-departure from the band and his current work with "sources within the aerospace industry and the Department of Defense and NASA."

According to the article, although DeLonge seemed comfortable talking about his time in Blink, stating "I love those guys ... The only thing I think about is, I want them to be happy. [But] I don't want the legacy of the band to get fucked with. I do care about that. I don't want an incredible legacy to be ruined," several weeks after the article ran, DeLonge contacted Rolling Stone saying "I am currently in the band."

DeLonge is not listed or shown in any of the promotional material for this tour.

Although DeLonge was a principal part of the humor and onstage banter between Hoppus and himself, Skiba brings a well of talent forged by a decades-long, respectable career in the pop-punk scene, particularly as the Alkaline Trio co-frontman and with side project Heavens, The Hell and The Sekrets.

Tickets for the concert, which will take place at the AT&T Center on Saturday, July 30, will go on sale Friday, May 6 and are available via livenation.com, attcenter.com or at the box office. Citi card members will have access to pre-sale tickets on select dates beginning Tuesday, May 3 at 10 a.m. through Citi’s Private Pass Program. Joining Blink will be All American Rejects and A Day to Remember.