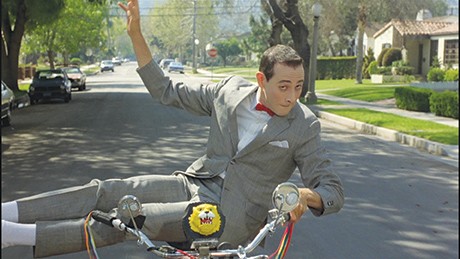 One Saturday morning in 1985, an unknown director named Tim Burton rolled into San Antonio wearing Bermuda shorts and a pair of cowboy boots. He was there to shoot a couple of scenes for his début film, Pee-wee's Big Adventure, which celebrates its 30th anniversary this month.

Along with actor Paul Reubens, producer Bob Shapiro and director of photography Victor Kemper, the small crew spent a day downtown to shoot exterior shots at the Alamo. Afterward, they wanted to go shopping.

"They shot their scenes and it was fairly short and uncomplicated," Kathy Rhoads, former director of the San Antonio Film Commission in the 1980s, told the San Antonio Current.

"After they were finished, they asked me to take them to the Lucchese Boot Factory, which was right down Houston Street at the time," added Rhoads, who helped facilitate the Warner Bros. visit to SA. "They all ended up buying new boots."

Two short scenes from the Alamo footage actually made it in the final version of Big Adventure. The first was Pee-wee prancing happily toward the Alamo in search of his stolen bicycle. The second had him running out of the historic mission with a petrified look on his face after a tour guide tells him the Alamo does not have a basement.

While San Antonio's contribution to the film only lasts a total of about 20 seconds (the rest of the film was shot in California), you'd be hard-pressed to find a local movie buff or 30-something not claiming Big Adventure as a major highlight in San Antonio's cinematic history. 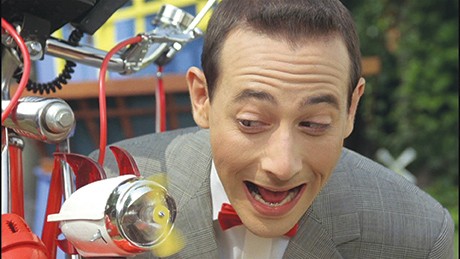 The Alamo City is not likely to be featured in Pee-wee's new film, Pee-wee's Big Holiday, which will hit Netflix exclusively in March 2016. Those behind the film are largely keeping cards close to their gray lapel when it comes to plot details, but that doesn't bother super-fans like local graphic designer and educator John Medina. Pee-wee's Big Adventure has given him enough memories to last a lifetime — he wouldn't trade them for anything.

"Whether it was the seedy, back-alley fortune teller, the murderous biker gang or the ghost of Large Marge, Pee-wee's Big Adventure really illustrated the sorts of anxieties and irrational fears I experienced as a kid when I didn't really know how the world worked," Medina, who opened an art and design studio in 2013 and named it Alamo Basement, told the Current.

"I've seen the movie well over 100 times and it still takes me back to that place of innocence where things can seem kind of scary, but ultimately work out in the end," he gushed.

Local artist and lifelong Big Adventure lover Amanda Kirk was at a local screening of the film at Alamo Drafthouse Park North earlier this year dressed as the title character. She thinks the film, which was a favorite of hers growing up, holds up extremely well even after multiple viewings. It just doesn't get old for her.

"It has a voice all its own and is stuffed with so many jokes that I catch something new almost every time I watch it," Kirk said. "It's campy, but sincere. I really feel like seeing it when I was little informed the things I liked as a teen and then as an adult. I don't think that would have happened if the movie had been crass or cynical."

Long-time SA film critic Larry Ratliff, who started at the San Antonio Light in 1983, remembered Pee-wee's Big Adventure as a "guilty pleasure" when he reviewed it when it came out three decades ago.

"I probably gave it about three jalapeños when I saw it," Ratliff said, referring to the review scale of 1-4 jalapeños for which he was famous as a critic. "It was silly fun. I think Pee-wee was very creative and a lot of that creativity carried into the movie."