Note: Be sure and check out the Current's slideshow tour of the House Float Parade.

Like countless festivals across the globe, Fiesta has been in a hazy holding pattern since the COVID-19 pandemic reared its head in early 2020.

Last March, the Fiesta San Antonio Commission announced that the 2020 celebration had been rescheduled from April to November due to safety concerns. While animated conversations ensued about a brisk Fiesta leading into the holidays, the postponement amounted to nothing more than wishful thinking. Amusingly, Fiesta diehards had no intention of waiting until November. Instead, they got creative in quarantine and found safe ways to celebrate in April. Folks took to social media and posted lively photos — of women in flower crowns, dogs in serapes, doors decorated with wreaths, even chicken on a stick being sold curbside — with the hashtag #AtHomeFiesta.

By the time summer rolled around, plans for Fiesta 2020 had been scrapped entirely.

“While we had hoped that postponing Fiesta 2020 from April to November would provide a safer environment, we recognize that the COVID-19 pandemic is not likely to subside sufficiently to permit the thousands of Fiesta attendees to celebrate safely,” Mayor Ron Nirenberg said in a press release at the time.

Again, more wishful thinking. By February, Fiesta had been postponed again, this time to June 17-27.

Fingers crossed? Surely, many are — including those of the myriad nonprofits that Fiesta supports — but others may hit the snooze button on a sizzling, sweat-soaked summer festival. Beyond the punishing heat, certain San Antonians are clearly Fiesta purists who are hardwired to celebrate the occasion in mid-April — its slot on the calendar for more than a century.

It’s safe to say the nonprofit King William Association (KWA) is among those purists. Last year, as a COVID-friendly alternative to its delightfully quirky King William Fair (a Fiesta fan favorite initiated in 1968), the KWA organized an informal “pop-up parade” with residents cruising the historic ’hood from the safety of their vehicles.

“We wanted to do something a little bit different this year since we’ve made the decision not to have the King William Fair in June,” KWA Executive Director Lisa Lynde explained. “I moved here from New Orleans, [and] I follow what’s going on there pretty closely. Last year, fairly early, the city decided not to have a traditional Mardi Gras celebration in 2021. In December, they announced this house float idea, [which] started with the intent of putting out-of-work float artists to work decorating homes. … I sent a copy of the story to our fair director and our parade wrangler and said, ‘Hey, we should do this!’”

Once the concept got a green light, Lynde reached out to Lavaca Neighborhood Association Board President Cherise Rohr-Allegrini.

“She was on board immediately and [suggested that we] ask the Roosevelt Park Neighborhood Association too,” Lynde said.

Presented as a creative collaboration between the three neighborhood associations, the resulting House Float Parade connects more than 80 homes, addresses for which can be found at ourkwa.org/housefloatparade.

“I’ve been really, really happy that it’s spread out quite nicely,” Lynde said. “It’s no one section — it’s really throughout. … We wanted people to have fun with it and do something wacky. … It’s kind of a nice way for people to relax, come down to the neighborhood, maybe grab lunch at a restaurant and then drive around and look at the homes. So that’s what our intent is — sort of a gift to San Antonio [that brings] a little levity and celebration to our respective neighborhoods.”

Unsurprisingly, many of the participating homes are decked out in the hallmarks of Fiesta and certain blocks appear almost as they would during the King William Fair — papel picado, garlands, wreaths and piñatas abound. But more than a few took the challenge over the top by collaborating with artists and choosing themes that run the gamut from playful and irreverent to poignant and political.

We highlighted five House Floats that exemplify the possibilities of what could become a new Fiesta tradition.

‘Another Schitty Year Without Fiesta’ (531 Adams St.)
“I wanted to be creative and step outside the box,” real estate agent John Barrera said of his Schitt’s Creek-themed house float. In addition to floating heads of Johnny, Moira, David and Alexis Rose blurting phrases such as “Ew Ted Cruz!” and “Eat Glass Fiesta,” the yard features a recreation of Moira’s “wig wall” that Barrera assembled from wigs his girlfriends donated to the cause. Tacked under the rooftop is a would-be advertisement for the cultish sitcom’s setting — the Rosebud Motel, “where everyone fits in” — which Barrera sees as a metaphor for the neighborhood. “Southtown is all-inclusive,” he said. “We’re just a very diverse neighborhood. I think we celebrate that.”

‘Battle of Vaccines/Viva Vaccines’ (613 Mission St.)
Local artist Leigh Anne Lester sums up her house float as a riff on Fiesta institutions — “Battle of Flowers, Fiesta hats and papel picado with a bit of a giggle at our current cruddy situation.” A sign of the times in more ways than one, her wildly colorful arrangement includes a giant sombrero emblazoned with the slogan “Viva Vaccines,” campaign-style signage for each COVID-19 vaccine (*microchip NOT included) and oversized syringes she crafted from caulking tubes — complete with blood droplets made from red pompoms.

‘Coronaville’ (801 Labor St.)
A spooktacular standout in Lavaca, Christina and Rudy Macias’ “Coronaville” is inspired in equal parts by a love of Halloween and Jimmy Buffett’s beach-bum classic “Margaritaville.” Announced by a sign that reads “Wasted Away in Coronaville,” their house float playfully conjures coastal decay as skeletons in Hawaiian attire chillax with cold brews amid tiki-style party decor. “We recently moved to the Lavaca neighborhood and were bummed because we could not enjoy Fiesta during the pandemic,” Christina said. “I’m really glad that we have a new way to celebrate and look forward to seeing Southtown come back to life.” 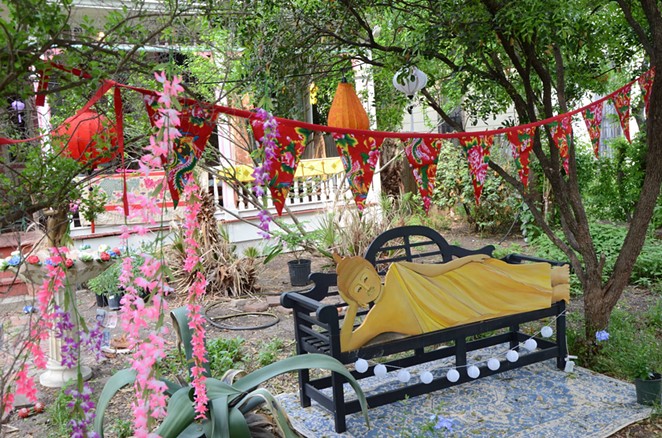 ‘The Reclining Buddha Contemplates Callaghan Avenue’ (127 Callaghan Ave.)
On her last pre-COVID adventure, artist and author Penelope Boyer traveled through Southeast Asia and purchased eclectic decor in Thailand, Cambodia and Vietnam. Although she collected the silk lanterns, banners and flower fronds to use in a “temple-inspired outdoor dining space,” they’re currently creating a Zen-like environment inhabited by three figures — a reclining Buddha and two asparsas — made by neighbor and fellow artist Michelle Humphreys Burk (whose “Avocado Avenue” house float is on view around the corner at 115 Canal St.). “My celebration of Southeast Asian street decorations comes during a difficult period marked by violence against Asians in the U.S.,” Boyer pointed out. “So, I aim to stand in solidarity with those who are opposing xenophobia and racial violence.” Taking cues from the initiative StopDiscriminAsian.org, Boyer also printed out posters that read “Viruses Don’t Discriminate, Neither Do We” and “Protect the Front Line, Not the Bottom Line.” While some are displayed along her fence, others are up for grabs in miniature format packaged in gift bags with sand dollars from Myanmar’s Andaman Sea.