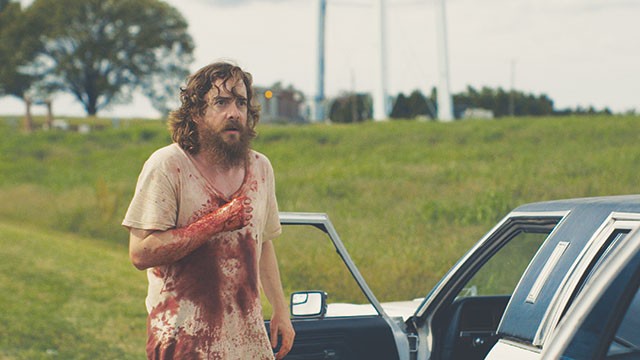 Vengeance is messy. That’s one of the most unfair things about life; how complicated justice can be. Major religions have warned us for millennia that humans judging and exacting revenge upon other humans rarely works out well for anyone. There’s always collateral damage, whether it’s civilian casualties in war, a child who must cope with an incarcerated parent or parents grieving an executed child … The idea of our justice system is to mitigate that damage, to determine what’s acceptable and what’s not considering the original grievance. But everyone knows that many people are never caught for the crimes they commit, and even if they are, the legal system can be gamed as well. Who deserves what is as great a question, if not a greater one, as the age-old “why am I here?”

While many, many other stories have tackled vigilante justice, Blue Ruin is particularly forceful in its exploration of vengeance, emphasis on the “messy.” (Seriously, though this is shown at the Bijou, you’re going to want to forgo their food menu.)

Funded in part by Kickstarter, writer and director Jeremy Saulnier’s uber indie Blue Ruin introduces us to a lonesome drifter whose main crime seems to be breaking into suburban homes to take a bath while the owners are away. The homeless man, played with an expert blend of understatement and bewilderment by Macon Blair, seems just a little smarter than the stereotypical bum, and a little more law-abiding, too. His first interaction onscreen is with a kindly police officer. The immediate question, “what’s a nice guy like this doing in a situation like that,” unspools deliberately over the next hour and a half.

The drifter is soon revealed to be Dwight Evans, the son of parents murdered by a hick in their small Virginia town. Once Dwight hears his parents’ murderer will be released after 20 years in prison thanks to a plea deal, he quickly and efficiently forms a plan to exact the ultimate retribution. But Dwight is no superhero, no Rambo, no gunslinger. While he’s smarter than you think, he also fumbles a lot in a weirdly endearing, almost comical way. Fearful of buying a gun, he resolves to stab his parents’ killer with a puny knife, and the ensuing grisly scene sets the standard for the movie’s gore factor. Saulnier’s last film, the campy Murder Party, used splatter as slapstick, but this time the realistic, brutal violence has no punch line.

Mirroring his own life, Dwight’s victim has a family, and he has royally pissed them off. Moreover, they are of the murderous redneck variety and not inclined to involve the cops. Dwight barely has a moment to transform himself from drifter beard to belted khakis-wearing everyman before he realizes they are coming for him. Worse, he’s managed to rope his innocent sister, now the mother of two children, into his debacle and he fears for their safety.

Dwight seems to have no other choice —or at least he seems to think he has no choice—but to kill the whole clan to ensure his family’s continued existence. His resources are a busted Pontiac, an absurdly high tolerance for pain and his old vagrant skill of living meekly on the margins of society. One of the many thoughtful touches in Blue Ruin is how many situations Dwight elides merely by being quiet and unassuming. It’s also thrilling to see Dwight cobbling together weapons, warning signals and otherwise MacGyvering his way in and out of trouble while consciously eschewing a Batman-esque arsenal.

Again, not exactly Rambo, but Blair’s performance as Dwight does cause the audience to re-evaluate their judgment on what the average homeless-looking dude is capable of, and what separates him from his more stable, law-abiding relatives (“I’d forgive you if you were crazy, but you’re not, you’re just weak,” Dwight’s sister spits at him before fleeing her home).

Like Dwight, much of the movie exists in the shadows, lurking in darkened houses and shady woods. In a nod to the title, the entire film has a bluish pall, so even daylight scenes have a muted wash. Likewise, the plot has few bright spots, despite some bone-dry humor and amusingly on-the-nose social commentary. Even the scenes in which Dwight triumphs—when the audience would typically feel vindicated—don’t have a celebratory tone. Because there is always someone else around the corner, someone pained or grievously injured by whatever tit-for-tat killing has occurred, and that tension lasts until the final frame. When the audience discovers the original sin upon which Blue Ruin’s entire tale is based, it seems absurdly minor compared to the bloodshed it’s caused. Saulnier manages to tie up this heady plot with an ending that feels both crushingly somber and entirely appropriate. The question that will have audiences buzzing as they leave the theater won’t be “was it worth it,” but, “Did they deserve it?”