The foursome of exhibitions currently on view at Blue Star Contemporary Art Museum is the most cohesive set of shows I've seen there in a very long time. This is exciting for many reasons. For one, through this project the museum is heralding San Antonio as part of the greater Latin world in ways large and small, re-mapping and re-contextualizing our place. But it starts by taking the viewer right out of where they are.

Based around the boundaries of printmaking, the Mary Heathcott-curated "Spatial Planes" is a slick, sophisticated, funny and spiky experience. The program accompanying it opens with what seems to be a new origin story/mission statement for Blue Star:

"Developed from a grassroots event in July of 1986, Blue Star Contemporary Art Museum is the first and longest-running venue for contemporary art in San Antonio. Blue Star as an exhibition space arose from the need to provide a platform for the work and ideas of local contemporary artists. In the years since its inception, Blue Star has grown with the community, instigating positive change in both the art community and the community at large.

"Now in its 28th year, Blue Star continues to be an incubator for contemporary art in San Antonio, hosting over 20 exhibitions each year within its four onsite galleries and multiple off-site locations within the community. These exhibitions feature both emerging and world-renowned artists who hail both from the Alamo City and across the globe. Over 300,000 visitors each year experience contemporary art at Blue Star through exhibitions, the MOSAIC after-school education program, and community events, which is why we at Blue Star stand firm in our commitment to inspire the creative genius in us all."

It's an impassioned, specific, contextualizing and democratic statement of intent. And it seems to illustrate what this quartet of shows is all about. 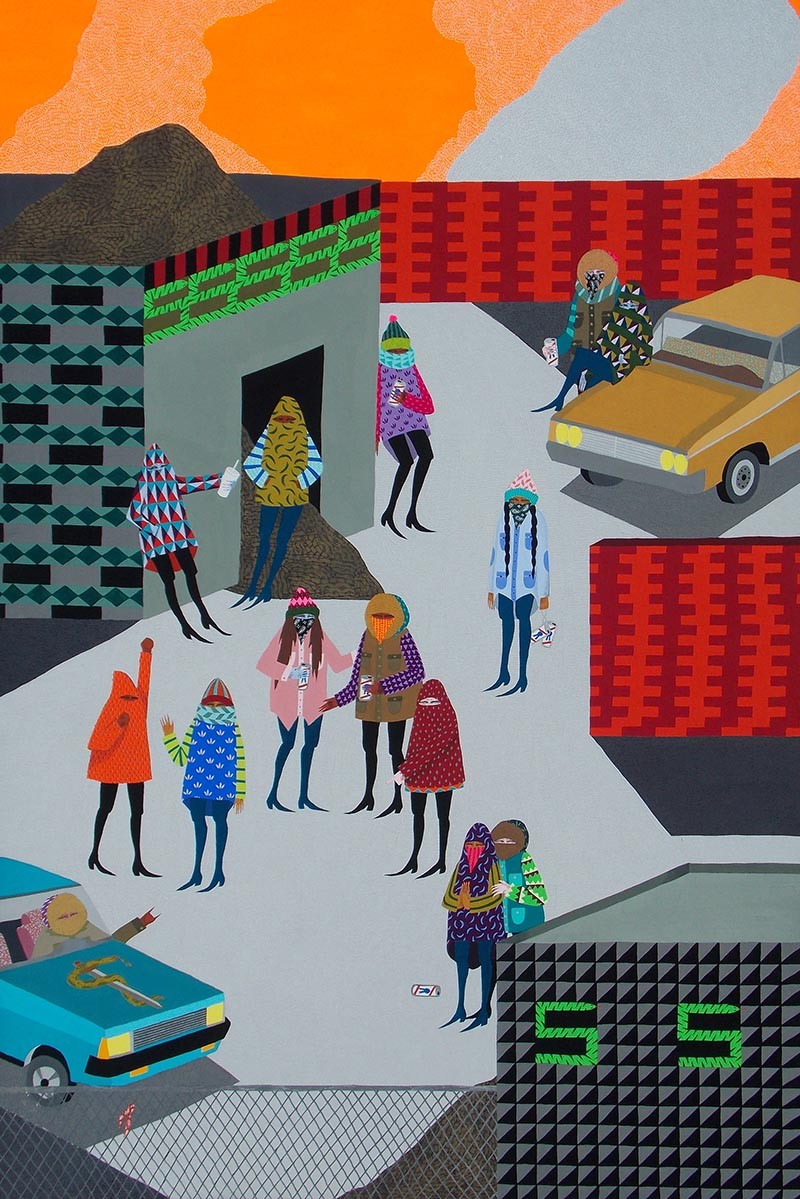 Among the local and regional talents Heathcott has curated for "Spatial Planes" is Angela Fox, who primarily works in gouache. Fox is an adjunct faculty member at the University of the Incarnate Word and San Antonio College, and received her Bachelor of Arts from UIW in 2004. I first encountered her work as part of the Texas Biennial in 2009 and was struck then by her potent mythology. In Fox's flattened, pointy geometric world, bundled humanoid shapes, rendered cartoonish in their pointed hoodies and black leggings, lurk or gesticulate at odd angles. Fox refers to her characters as "tightly knit gangs," which she explains have a tendency to "hang out and to drink beer while gathering supplies, slaying serpents and establishing camps—embarking on adventures of survival, creation and destruction."

It's bewitching stuff with an itchy, subconscious potency, like cool illustrations from the book you read when you were six and can barely remember, but you do Google image searches anyway, just to catch another glimpse.

And while Yuko Fukuzumi is originally from Yokohama, Japan, she studied in the U.S. at San Antonio College and completed her Bachelor of Fine Arts degree at Texas State University. (Importantly, several of the "Spatial Planes" contributors are linked by Texas State, which exemplifies that university's under-appreciated excellence.) Her series of 81 "cards," each of them layered with sticky origami paper, is called Just Me Love Me, and is an expression of her "last appreciation for the relationship," a kind of dénouement of a monogamous romance. One that happened hereabouts, apparently; in her statement, she says "during the exhibition viewers who know me or him personally may ask museum staff for 'a piece of my heart.' The piece is a souvenir from this pivotal moment of my life, one each person may choose to do with whatever they want. The space the piece once occupied will remain empty on the wall for the remainder of the exhibition."

Each card calls to mind the harmonious color and pattern typical to origami, but out of each image, one can Rorschach out songbirds, landforms, dancers and other fractured accoutrements of love. More than prints, they are poetry.

In the Middle Gallery, the Blue Star mission statement is accomplished via the work of Fernando Andrade, said by some to be the heir to Vincent Valdez in the precision of his graphite approach to a complex conundrum: the origins of human violence and the generalized and touristic violence found currently along our border with Mexico. His series of drawings, titled Tierra y Libertad, is a material response to the disappearance of one of Andrade's close friends due to drug cartel violence. He studied at San Antonio College and volunteered in numerous Westside mural projects. His individual work is delicate, disturbing and technically accomplished. In a contemporary art era in which the mythos and pathos of the border drug wars can seem rote and even preachy, he stays so close to lived experience it's well-nigh impossible to walk away unfazed. Maybe even more than Vincent Valdez, Andrade's ethos recalls the French film The Rules of the Game, in which children reeling from the effects of the World War II enact elaborate funerals and graveyards for fallen animals.