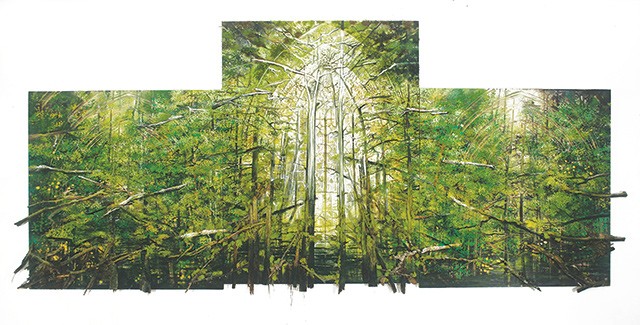 Influenced by two millennia of Catholic guilt and the ancient mummies of Peru, Houston artist Sharon Kopriva’s ghastly figures — wretched priests, beastly bishops, conniving cardinals, naughty nuns, and masochistic worshippers — are made with animal bones, teeth, fabric, clay, wood, and papier-mâché. Maybe it’s a typo, but another ingredient listed for her Stations of the Cross piece is “pain.” Educated in a Catholic school before the Second Vatican Council, Kopriva says her earliest impressions of the Church were “darkness, fear, penance.”

As an artist, her career-making revelation occurred during a 1982 trip to the ancient Nazca burial sites in Peru where she became fascinated by the mummies, usually buried in a fetal position, similar in appearance to the small child swaddled in a basket in her Ancestral Footprint. Rather than seeing dried-up dead people, Kopriva reveled in encountering the 500-year-old remains. The earthen umbers and dusky reds of the mummies, created by the naturally dry environment, color her sculptures although most of her skeletal figures go about their daily lives much like Day of the Dead calaveras.

The most impressive installation in “From Terra to Verde,” a 30-year survey at the Blue Star Contemporary Art Museum, is based on the confessional where Kopriva received the sacrament of penance as a youth. It’s also the result of a residency she had in the early 1990s sponsored by artists Edward and Nancy Reddin Kienholz, known for their elaborate tableaus of modern life.

More like a theatrical set than the rest of her work, Kopriva’s The Confessional (1992) is lit from within, and through the curtains you can see a grinning priest wearing a black robe and purple scarf sitting in a chamber between kneeling, wizened female supplicants. Though the scene is shrouded in secrecy, it’s hard not to snicker when you notice the priest’s crummy black shoes poking out from under the curtain. Flanking The Confessional is Kopriva’s Stations of the Cross series that substitutes a dead flower for the Christ figure.

Kopriva exposes the pedophilic sins of the priesthood in Prey for Us (2005), an altar boy looking at the words of the title written in blood red on the wall with crayons spilled on the floor. Looming over him, engulfing the vulnerable child, is the ominous shadow of a clergyman cast by a projector.

The Cardinal (1994) is a smug red toad of a man as overstuffed as the chair he overflows. A desiccated pope, a three-dimensional caricature of Velasquez’s Pope Innocent X, is confined to a wheelchair in From Dust Thou Art (1997). But referring to the biggest heresy of all, the shriveled pope has a monkey in his lap and he’s holding a copy of Darwin’s Origin of the Species. A chilling, con artist priest presides over Extreme Unction, with a body laid out, candles placed on a cross resting on its chest and a female mourner who remains attached to the dying by living vines.

Despite the scathing satire, Kopriva’s work is not intended as anti-Catholic. Instead, it reflects the anguish of a Catholic artist who can’t believe the ethical and moral failings of the church.

Perhaps no contemporary artist comes closer to making viewers feel the suffering of martyrs than Kopriva does with her three crucified saints. Sebastian is lashed to a tree trunk, his body pierced by arrows. Peter is nailed to a traditional cross, but it’s upside down with his rib cage exposed in horrifying detail. Andrew is tied to the X-shaped cross that the Romans probably used for most executions.

Kopriva usually attaches three-dimensional objects to her paintings, such as the hundreds of tiny skeletons rising into the sky toward the Madonna of Heaven and Earth. In her most recent paintings, such as the enormous Cathedral Green (2012), forests become cathedrals, reminiscent of Thorncrown Chapel near Eureka Springs in Arkansas. Using photographs of the interiors of Europe’s greatest cathedrals in paintings of forests, Kopriva has branches, moss, and rocks tumbling out of her romantic landscapes. But Kopriva’s sunny spirituality may stray too far into Thomas Kinkade sentimentality, perhaps an over-reaction to the oppressive darkness of her earlier work, which is enervating, yet impossible to forget.

Sharon Kopriva: From Terra to Verde