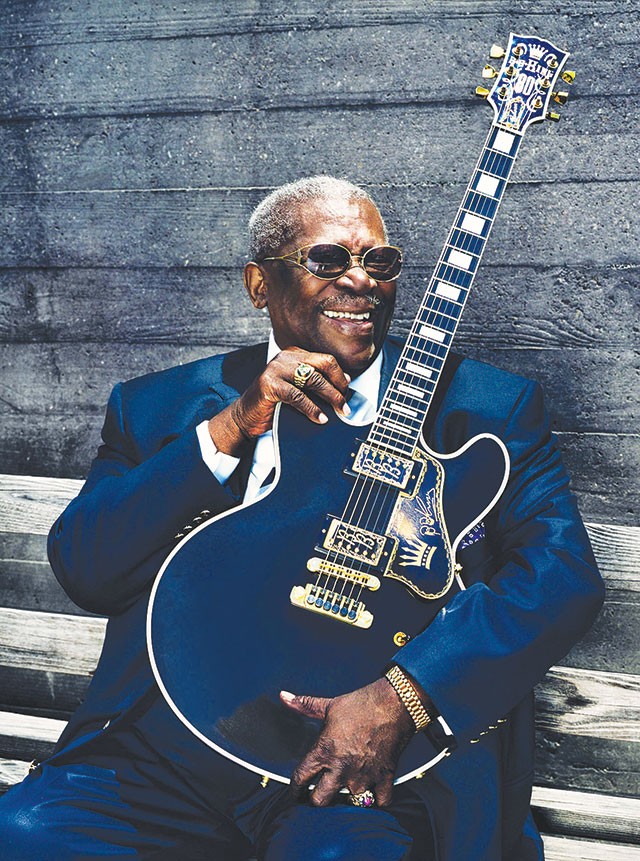 It’s the winter of 1949 down in Twist, Ark., and B.B. King is playing a cold, wooden shanty of a nightclub, when the kerosene-filled garbage can heating the juke spills over in a bar fight, lapping the place in flames. Spooked, the venue patrons spew out its door, safe but cold in the biting Ozark air. Except for King, fighting against the human tide and the blues joint’s tumbling bones to save his instrument from its kerosene doom. “[The building] started to fall in around me,” King said in an interview making the rounds on YouTube. “I almost lost my life trying to save my guitar.”

“The next morning we found that these two guys was fighting about a lady that worked in the little night club,” King said. “I never did meet her. But I learned that her name was Lucille. I named my guitar Lucille so I’d never do a thing like that again.”

King, pictured, has stayed true to his promise in workhorse fashion, keeping his six-string confidante close by, requiring her attendance at a finger-blistering number of gigs. Though he won’t beat his jaw-dropping personal best of 342 performances in a year (1956), this summer alone, the 88-year-old King of the Blues will headline 29 performances.

A cornerstone of any “Best Guitarist of All Time” listicle, King has been active since 1943, emerging from the Mississippi Delta with lightning bolts of staccato guitar and a voice like melted butter. Upon his arrival in West Memphis, Ark., in 1948, King quickly earned a slot performing and jockeying on KWEM, where the nickname Beale Street Blues Boy stuck, consolidated later to the marquee-friendly B.B.

For King and the post-war black blues musicians, there was no devil-deal at the crossroads necessary; in the form of de facto segregation in the North and the tyranny of Jim Crow in the South, black artists faced a daily and systemic demon just to get paid for a gig. By 1949, after King’s deal with LA’s RPM Records, he began his romp through the Chitlin circuit, the Jim Crow-era collection of clubs that would host black musicians and audiences.

But Jim Crow apartheid couldn’t isolate King’s reign over the blues; he became an international star with his name on ABC Records in 1962 and the 1964 classic, Library of Congress-preserved Live at the Regal. Recorded at Chicago’s historic Southside venue, King shines as an entertainer, with a seven-piece horn section providing a soulful counterpoint to the guitarist’s spine-tingling vibrato and burning R&B sonance.

Joining the 15-time Grammy winner is the maestro of Memphis Soul, the virtuosic Booker T. Jones. At his April date at the Empire Theatre, Jones traded off between a Telecaster and the Hammond organ on which he made his Stax Records fame, dropping soulful licks on each as he grooved through a staggering number of his ’60s hits and recent, stellar releases.

Though the Majestic billed them as separate performances, fans of blues, soul and awesome collaborations can only hope that these icons and improvisers will team up Thursday evening. If King joins Jones on the classic strut of “Green Onions,” any previous Faustian blues bargains will be made void, ’cause there’ll be a new deity in town.