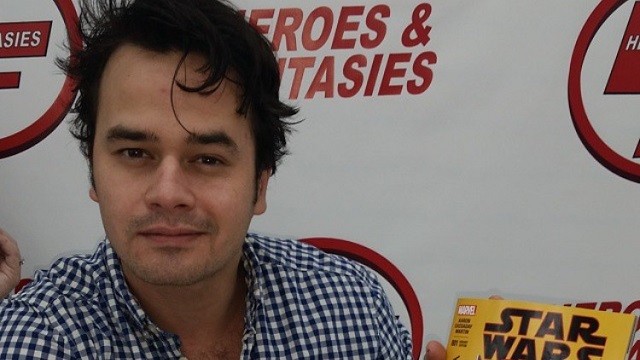 Daniel Logan played a young Boba Fett in Star Wars Episode II: Attack of the Clones, and his life has never been the same since.

[Photos: 60 Photos of Star Wars Bounty and Boba Fett at Heroes and Fantasies]

Overnight, he went from an outgoing, average kid living in New Zealand to the kid otherwise known as a ruthless bounty hunter.

I sat down with Logan at Heroes and Fantasies’ Star Wars Comic Celebration to talk about his role in Star Wars.

“Since 13, I haven’t been able to live a normal life. It’s been amazing. I get to travel the world, sign autographs, and really embrace Star Wars … as an ambassador.”

"They would make the sound of the light saber every time they saw me. It was totally mad," Lloyd told the Daily Mail.

Citing the failure of the movie to live up to expectations and endlessly revolving interviews and cameras, Lloyd retired from acting.

Logan, of course, endured teasing, too. When other kids saw him, they would parrot lines back to him from the movie. Sometimes it seemed to be in good fun, but not always. Instead of being resentful or critical of the franchise, Logan expresses gratitude.

As a child, Logan was poor. His mother raised him and his five other siblings on her own. The opportunity to be part of the Star Wars franchise, Logan says, has helped his family financially.

Since Logan’s iconic role, he has had many opportunities. He trained in martial arts with Ray Park, who played Darth Maul in Star Wars Episode I: The Phantom Menace, for several years after the movie. Notably, he reprised his role as Boba Fett in the animated series Star Wars: The Clone Wars.

With Star Wars: The Force Awakens coming next year and plans for spin-off movies, Logan is excited.

"I would want to be in a Boba Fett movie or television show," says Logan about the ideal next role in the Star Wars universe.

But even he doesn't get that chance, he’s proud to be among the few who have portrayed fans’ favorite bounty hunter.