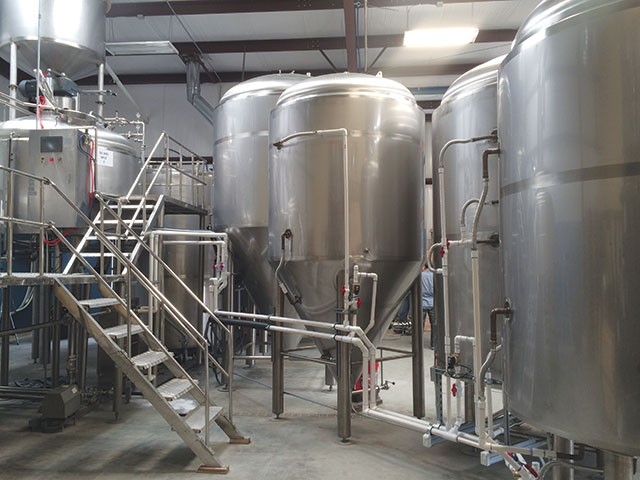 If you’ve lived in San Antonio for any length of time or visited often, then chances are you’ve been to the picturesque little town of Boerne. A mere 30-minute drive from San Antonio lands you in a place that, in many ways, hasn’t changed much in the last hundred or so years.

Home to the Dodging Duck Brewhaus since the early 2000s, Boerne now has a new kid brewing traditional ales. Led by founder and head brewer Fred Hernandez, Boerne Brewery looks to honor the area’s German roots but with a Texas twist. Hernandez and his marketing/sales manager Roger Castillo recently met with the Current and gave us the scoop on the operation.

The 6,000-square-foot Boerne Brewery broke ground in 2011 on property formerly owned by longtime residents Edgar Voges and his wife Anna, who had lived in the Boerne area since the early 1900s. A labor of love, Hernandez and Castillo did much of the interior build out, often using pieces of the original farmstead, like rock from the farmhouse’s original façade and corrugated metal from the nearby sheds. “This area and this land have a lot of history that we want to honor with our beers and community involvement,” said Hernandez as he pointed out several Sinclair Oil signs they dug up from the property that now adorn the brewery’s walls.

Though the equipment arrived in 2012, it wasn’t until the summer of 2013 that they were able to start brewing. “Our equipment was manufactured in China,” said Hernandez. “Not surprisingly, it was built to design specifications and not standard engineering. The parts are not inter-changeable.” With the kinks worked out, the brewing began.

Boerne Brewery will start off with four year-round offerings, of which three are already available: Denim-Hosen, a traditional Kölsch-style wheat ale that has a clean, crisp finish (perfect for Texas summers); Willy’s ESB, a hybrid of an extra special bitter and a pale ale, boasting a heavy malt profile but light mouthfeel; and Old Courthouse Ale, an English old ale with notes of roasted barley and nuts. On the horizon is Hopstrasse, an American IPA that balances the malt and hops equally.

The logos boast artwork indicative of Boerne’s German roots, with each design rendered by area artists, further supporting the brewery’s commitment to their local roots. It doesn’t stop there—the names also tie into the area’s history. Willy’s ESB is named for one of Boerne’s most prominent citizens, William George “Willy” Hughes, a rancher from England who settled in Boerne in 1878. Old Courthouse honors Boerne’s historical building, the second oldest courthouse in Texas. Hopstrasse references the town’s main street Haupstrausse (a German term akin to “Main Street”).

“We’re about community,” said Hernandez, who pointed out that the Voges won a contest to name the town’s beer festival “Berges Fest,» held each year on Father’s Day (Thank you, Edgar!). “[It’s] ironic that a brewery now stands on their former property,” said Castillo. Hernandez also stated they hope to have a seasonal offering each year for the festival.

I’m a history nut and loved hearing these stories, but it was time to get down to brass tacks—the beer. Namely, where can we get it? Distribution began January 6 with sixers available for around $9 in Boerne area liquor stores and bars, as well as in Gabriel’s Super Store at 1604 and Blanco in San Antonio. “We’re close to a deal with H-E-B,” said Hernandez “which would bring our beers to stores in Boerne, Kerville and a slow roll out in San Antonio.” Prost!