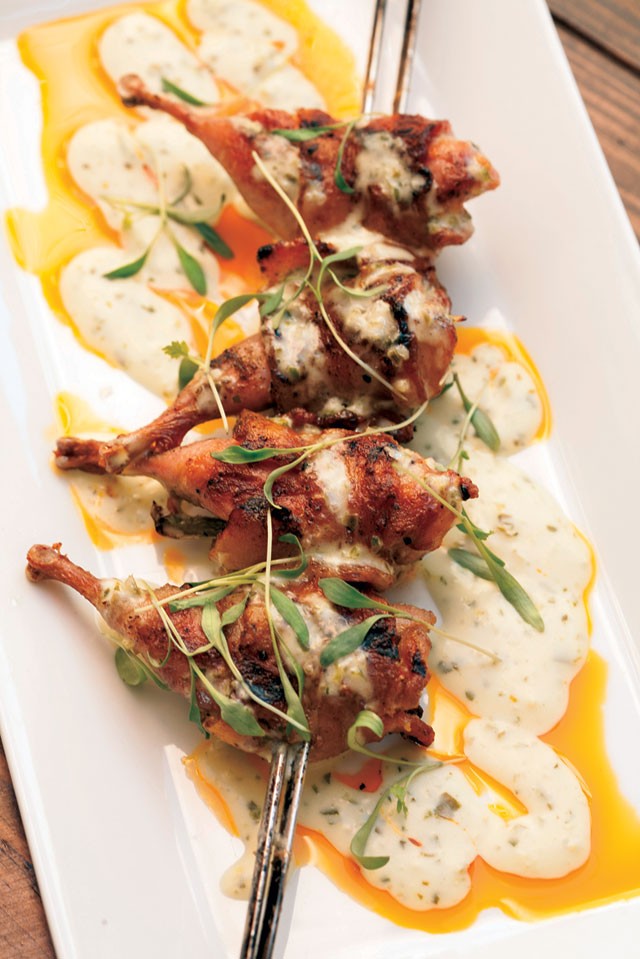 Harry, the neighborhood hound, was greatly appreciative of the lamb shank bone he was brought from Boiler House, easily the most dramatic new restaurant to open in San Antonio in recent months. His appreciation was not diminished in the least by the bone's having been previously picked whistle-clean.

Harry, it should be said, is not a fussy eater, despite having had some pretty swell morsels slipped to him out the back door over the years. The morsel maker is a tad more persnickety. Oh I liked the fork-tender lamb itself, but was less thrilled with the offbeat orange-pistachio gremolata (when made with lemon, garlic and parsley, it's classic with that other shank, osso buco). Harry is also oblivious to the sometimes tug-and-pull between tradition and invention.

Wild boar polpettes (meatballs), from the oddly named Boiler House Proteins column, are, however, the essence of most excellent invention. They have appeared at several BH events recently and, along with their spicy tomato and red pepper sauce, should continue to appear until we all get tired of them. Ditto the equally unpretentious quail "poppers" with bacon, jalapeño and green goddess dressing.

Red snapper ceviche, however, is a dish done in by its artsy aspirations — the perfectly fine parts, including popcorn, are all spread out with no way to really appreciate the whole. Execution was the issue with an order of marrow bones. Bone marrow is ideally a triumph of luxurious taste and texture over the work required to extract it; there are special spoons for the job in your grandmother's silver service. No spoon was provided and none was required in this instance; the bones had been baked to such a fare-thee-well that almost nothing remained inside them to spread on the generously supplied grilled bread. An appealing tomato jam and another gonzo gremolata (now called simply "parsley" on the menu) accordingly went to waste with little to play against. These bones I was ashamed to take to Harry.

Despite his largely omnivorous nature, Harry is not particularly interested in salad, and I finished all of my grilled romaine in any case. I might have gone for more assertive grilling, but this was an instance where deconstruction worked; the romaine's essentially a pulled-apart Caesar with tiny grape tomatoes, rolled anchovies, a crispy, cheesy frico, and a masterful lemon garlic dressing to set it all off. Harry was outta luck on the steak this would go nicely with for two reasons: the 14 oz. Prime, center-cut ribeye was boneless, and the $45 price tag discouraged any dog-directed largesse.

Topped with an umami-adding uni butter, the steak was beautifully done; if you absolutely must have big beef, go for it. (An even bigger cut is the 32 oz. Tomahawk ribeye for two; it's $95) But know that, in steakhouse fashion, it is served solo. Here are a couple of From the Market suggestions for friending it: mixed mushrooms with truffle oil and poached egg (potentially spectacular with the runny yolk of a properly poached egg — which this was not); Brussels sprouts with country ham and grilled lemon (sprouts are beginning to cloy, but these are as good as any in town).

As BH is a sibling of Max's Wine Dive, we are led to expect a well-developed wine program; it's not as extensive as the Dive's, especially by the glass, but there's plenty to appreciate regardless. An on-tap house garnacha delivers at $7.75; $8.75 will net a taut and edgy Argan tempranillo. An attentive waiter brought a taste of another Spaniard, the Clos de Tafall blend from Priorat (not normally sold by the glass, there was an open bottle), and it was a perfect match with the steak. No bones about it.