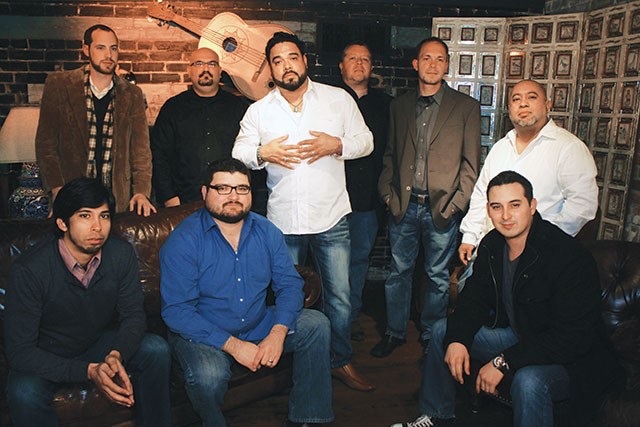 It’s hard to keep a band together, especially if it’s a nine-piece combo. Without an album, the task is next to impossible. Unless, of course, the name of your band is Bombasta.

“Yeah, I probably misunderstood something,” the “barrio big band” leader Roberto Livar confessed, in reference to the Spanish-sounding, but actually meaningless, name of the group. But Bombasta stuck, and so did the band, at least in the last three years, after “two or three” lineup changes in the last decade. On Saturday, Bombasta will celebrate 10 years and the Southwest Workers Union its first quarter century with an impressive night of music at Hi-Tones (Conjunto Aztlan, Mexico City’s Los Guadaloops and Master Blaster Sound System’s El Dusty will be part of the desmadre).

“We share [with SWU] the same vision of the world, but there’s also a more personal connection with them,” said Livar. “We did our first gig on December 20, 2003, at Café Revolución with [El Paso’s] Fuga, at a SWU event.”

Since then, and in spite of not having a full-length album (Bombasta has only released a handful of singles and EPs), the band has been active and popular enough to win awards at the Current’s annual music poll, most recently Best Video, Best Latin Alternative Band and Best Keyboardist (Jaime Ramírez, who left the band in November “to pursue other projects,” according to Livar). Livar claimed that the band’s too numerous, grassroots, independent and poor to record a full-length. I didn’t buy it, so I pressed him on the issue, emphasizing the fact that recordings are a key element of any band’s legacy.

“I know, an album would help, but there’s no feria [money]…” he said. Then he finally added an understandable—and believable—reason that makes me give him the benefit of the doubt. “I agree we owe ourselves and our fans an album, but I also think we owe our fans that whatever it is we put out there is first class. We don’t want to put something out just to put something out. If we don’t have the money to do it right, we won’t just put out something that’s half-assed. Plus: we’re all músicos who grew up playing in bars. I’m a musician first and foremost. The drive is always having that personal experience, to connect with a live audience. A recording artist is a totally different thing.”

The band—Livar on guitar and vocals, Travis Vela on guitar, Dillon Buhl on trombone, Carlos Álvarez on trumpet, Rolando Salazar on tenor saxophone/clarinet, J.P. Leal on bass, Ali Friedrich on baritone sax, Lauro Torres on percussion and Rudy Díaz on drums—is an explosive blend of cumbia, hip-hop, reggae, salsa and rock that never bothered with orthodoxy.

“It all starts with the rhythm, the bpm, and we go from there,” Livar said. “But it’s never a, say, straight-up cumbia. We start with one, and before you know it, you hear a hip-hop breakdown in the middle of it with reggae horns on top.” As far as the process of creating this cacophony, “I bring in the skeleton and everyone throws in some suggestions,” said Livar. “We’re constantly working on breaks and transitions and experimenting with different rhythmic stuff. That’s what we have going for us.”

Their mastery of Latin rhythms got a boost this year when they were asked to be the live band for the Woodlawn’s Theater production of the Tony award-winning musical In The Heights. The score’s Nuyorican theme proved a valuable experience for the band. With the help of former keyboardist Ramírez (the only one with musical theater experience), Bombasta tackled Lin-Manuel Miranda’s original music for a run of 15 shows over five weeks last spring.

“We learned a lot from it, even how to run rehearsals better,” Livar said. “We’re so pocho in the way we approach Latino music that [working on the play] really helped us understand Latin music. When you have it written down, you get a much better understanding of different salsa rhythms.”

So there you have ’em, the we-don’t-need-no-stinking-album boys, having the last laugh after 10 years while others with more CDs or mp3s to show for it find it hard to survive a third of that. Livar is grateful, and so are Bombasta fans.

“To be able to do what we do, it couldn’t happen anywhere else than in SA,” he said. “The amount of supportthan we get across age, class, race; it’s really something special. In other places you might only get noticed for [your limitations], but here it’s all corazón [heart]. Yes, we have our shortcomings, but chingaos, we’re sitting here doing an interview and getting lots of press. We must’ve done something right.”