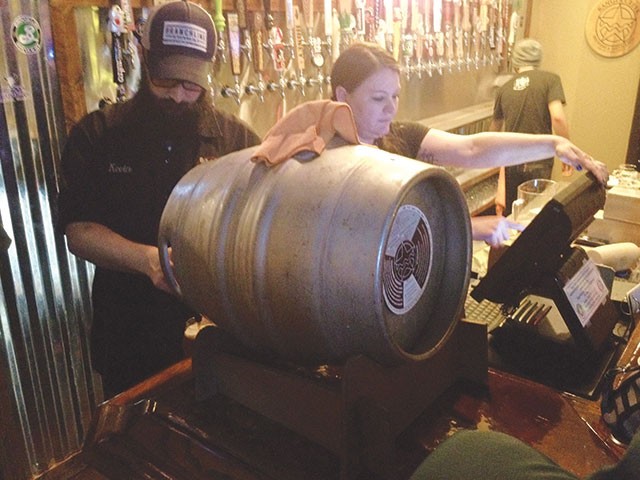 In the December Bottle & Tap, I listed my favorite San Antonio watering holes and issued a plea to Current beer lovers to tell me theirs. Add this to the list: Big Hops Gastropub, at 22250 Bulverde.

It didn’t take me long to realize this is my kind of place—I immediately spied a cask (or “firkin”) sitting up on the bar top. There are few things I love more than cask-conditioned beer.

The cask this night was Ranger Creek Small Batch No. 8, a richly flavored barleywine with a wonderful hop kick. (I paired it with a mighty tasty burger topped with a fried egg, and I’m pretty sure I’d better refill my Crestor prescription.)

If you’ve never tried cask beer, remedy that ASAP. Some purists call it “real ale.” The brewer pulls aside a few gallons before the carbonation stage, gives it some extra flavor oomph with an added blast of hops or other special treatments and lets the flavor (and carbonation) mature naturally in the cask.

It’s a little less fizzy than regular beers, and pours out using only good old gravity.

And where you’ll find casks, you’ll find beer geeks. This occasion was a get-together and fundraiser for Open the Taps (OTT), a citizen group that successfully lobbied the 2013 Texas Legislature for major changes to state beer regulations. The new laws made it easier for Texas craft brewers to market and sell their delicious products. (Full disclosure: I work for a key senator involved in passing those new laws.)

Basically, the two major changes are: Brewpubs can now distribute their beer to retail or other bars, while production breweries can now sell glasses of product in their tap rooms.

Not only was I there for tasty beer, I also wanted to ask: What could possibly be left for OTT after its 2013 success?

Our host was Jeremy Banas, director of San Antonio’s OTT chapter and a regular Current contributor. In December, he wrote a Current preview of the Gastropub, and on this night was visibly excited that the culinary extension of Big Hops is off to a roaring start (Big Hops’ other two locations, on Broadway and Huebner, are “growler stations,” sans food).

Banas started the local chapter in 2011 and knows there’s more to be done. “What is incredible to me still is the passion I see in other consumers in wanting to help change antiquated laws that … prevent them from enjoying all that Texas breweries have to offer… wanting help change the climate of the law to allow these breweries to grow, thus stimulating the economy.”

After the event, I contacted Houston’s Leslie Sprague, OTT’s statewide media director, and she confirmed there is still work to be done.

“We hope to make changes that allow [production] breweries to sell beer for off-premises consumption, as well as several other issues that affect consumers and business owners, like allowing growler sales in mixed beverage licensed retailers and rules concerning beer festivals,” Sprague said. “The list of laws that needs changing is long, but with the help of stakeholders and our members we hope to keep chipping away!”