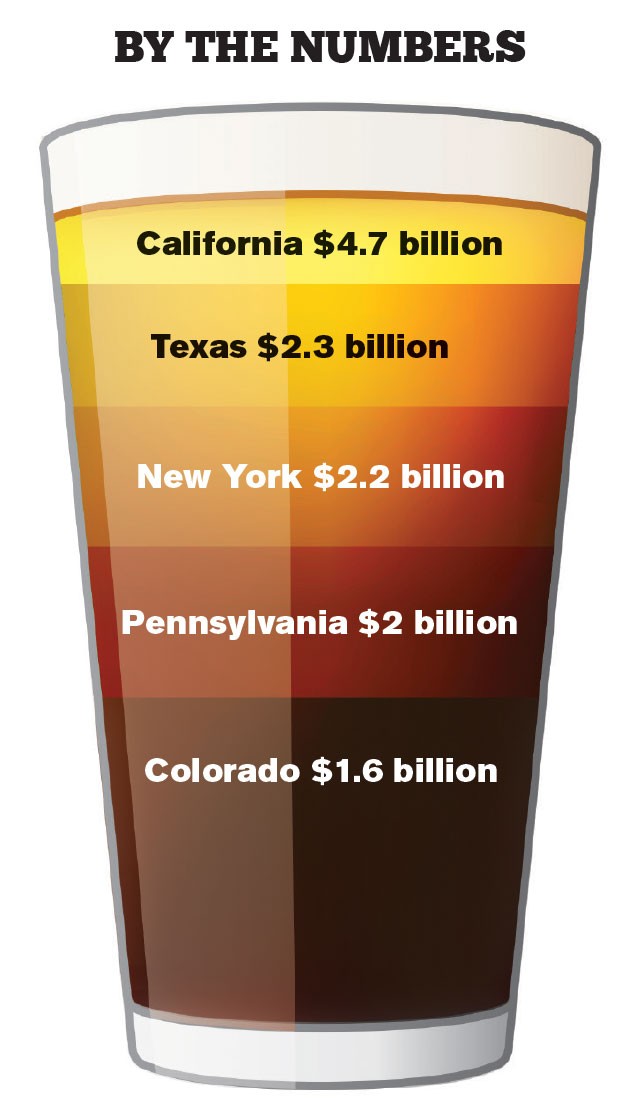 The Texas craft brewing scene has arrived. I believe the time has finally come for us to stop having an inferiority complex about how our industry stacks up against more celebrated beer states like California, Colorado and Oregon.

The Brewers Association, a trade group of small and craft brewers, released a report last month celebrating the $33.9 billion contribution that the craft brewing industry made to the United States’ economy in 2012 and ranked the top five states by 2012 economic output. I was shocked to see that Texas ranked second, at $2.3 billion! That puts us well behind the $4.7 billion of California, but well ahead of the aforementioned Colorado (fifth at $1.6 billion).

I’m not sure why it should have surprised me so much. I already knew Texas’ craft brewing was taking off. The Texas Craft Brewers Guild knew it, too—a 2012 study created by Freetail Brewing owner Scott Metzger (who moonlights as an adjunct professor of economics at University of Texas-San Antonio) predicted that Texas brewers’ impact could grow significantly from the $608 million in 2011, up to a whopping $5.6 billion in less than a decade, if the Texas Legislature would pass laws removing certain constraints from the industry.

“The results of the nationwide economic impact study really hammer home what we’ve been telling folks at the Capitol for years,” Metzger says. “Texas is a huge state with a lot of untapped economic potential.”

The number that really gets Metzger excited is not the $2.3 billion, but 34: That’s where Texas ranks in per capita economic impact. Meaning, on a person-by-person basis, there are still lots of Texans out there who haven’t really explored craft beer … yet.

“The No. 2 ranking in total economic impact is easy to rally behind, but it’s really just the benefit of our state having the second largest population in the country,” Metzger explains. “The per capita ranking of 34 is a better indicator of how much more room the industry has to grow here in Texas.”

“With the new laws passed in 2013, I think it is just a matter of time before that $2.3 billion dollar figure gets to the $5.6 billion figure that we (the Guild) projected by 2020, which we tried to be very conservative in projecting. In reality, I think we’ll get there well before 2020 and by then we could be talking about an economic impact of $10 or $12 billion.”

(Full disclosure: I work for a state senator who was instrumental in passing those new laws.)

When this whole craft brewing revolution took off, I could count our state’s craft brewers (back then we just called them microbreweries) on one hand. For the longest time, Shiner seemed like the lone alternative to Bud/Miller/Coors, and even then, bock was the only thing Shiner was doing that really stood out as innovative and different—Shiner’s other beer, what we called “Shiner Premium,” was just an ordinary light-flavored lager.

Now, when I go to a brewing festival or beer bar, it seems like there’s always some Texas newcomer. When I go to the store, I always tell myself, “Try something non-Texan for once,” but usually fail, because I spy some new seasonal by Southern Star or No Label and can’t resist it. And I’m usually rewarded with a great-tasting brew. Apparently, the best is yet to come.