Bottle & Tap: Time to get hoppy for local beer fests 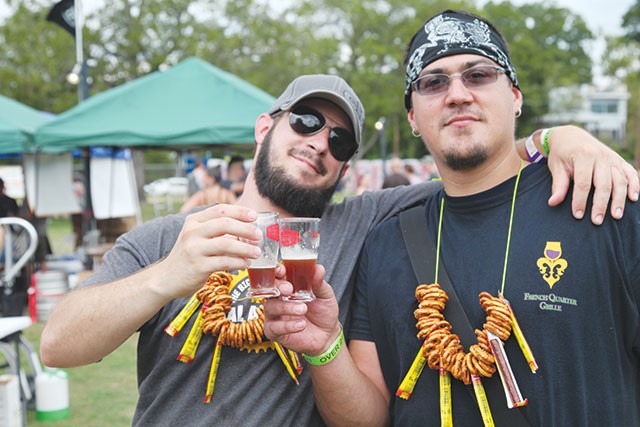 If you’re a beer drinker, then you’ve gotta love fall. The cooler weather begs all to head outside and just about every beer bar worth its suds has some nod to Oktoberfest. Then, of course, there are the big blowouts in places like Fredericksburg and New Braunfels (Wurstfest). We also have straight-up beer festivals, sans the German theme. Austin just enjoyed one, and San Antonio (courtesy of the Current) is about to enjoy another.

This year was the 10th incarnation of the TCBF, but only the third consecutive since it was revived after a hiatus back in 2011. It’s now safe to call this a fixture—even a mid-day downpour couldn’t chase off thousands of attendees searching for hoppy goodness. More than 130 beers were to be had, including some special festival-only creations. As I always do at such festivals, I shy away from my regular beers and hunt for stuff I’ve never tried before. Among my highlights:

• 667 Neighbor of the Beast, by Magnolia’s Lone Pint Brewery is a beast of an IPA that hits hard with the hop punch. I immediately questioned whether starting with such a palate-wrecker was wise, but I don’t regret my decision—it was delicious.

• Apparently, the Houston suburbs are the place to be if you’re starting a brewery. I was delighted with the hoppy complexity of Battle Line by Richmond’s Texian Brewing. I’m not normally a fan of brown ales—I initially refused it when offered and then changed my mind, and I’m glad I did.

• And I damn sure didn’t expect good craft beer from rural northeast Texas—my family’s from there, so I can judge—but Scruffy’s Smoked Alt from Cedar Creek Brewery in Seven Points was the highlight of the entire festival for me. Cedar Creek’s website describes this brew as “moderately smoky,” but I disagree—it was pungent and strong and wonderful. (Look for this at the San Antonio Beer Festival.)

• Of course, I’d have been remiss in my duties if I didn’t sample some San Antonio-area wares. I got to Ranger Creek’s tent too late to get its smoked beer, but the Southtown Imperial IPA made for a fine consolation prize, and it only made sense to sample the Lobo Oktoberfest by Fredericksburg’s Pedernales Brewing.

If you missed TCBF, I’m guessing you’re crying by now. Cheer up, San Antonio—the Current’s San Antonio Beer Festival is promising more than 200 beers and not limiting itself to just Texas brews. It even has Bud Light if you’re so inclined, although you owe it to yourself to be adventurous—grab some Green Flash, Stone or Firestone Walker (California), Founders (a particularly outstanding Michigan brewery) or one of the European or Mexican offerings. Remember to pay a visit to Cedar Creek!

And dammit, I can’t make it into San Antonio that day. Promise you’ll drink a few for me and tell me how it was?

Check out which Texas brew is currently winning our beer bracket, and taste it for yourself on Saturday at the San Antonio Beer Festival