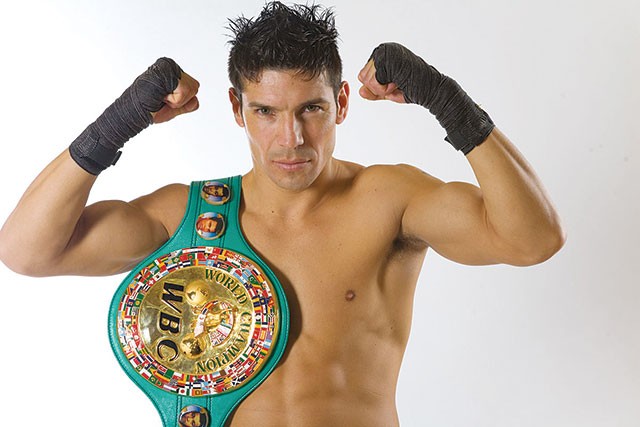 For years, 38-year-old Argentine boxer Sergio “Maravilla” Martínez (51-2-2, 28 KOs), middleweight champion of the World Boxing Council, was considered by experts as the third best pound-for-pound boxer in the world, just behind Floyd Mayweather Jr. and Manny Pacquiao. He’s still easily in the top 10, but is he still “maravilla” (literally ‘a marvel,’ in Spanish but used more like ‘marvelous’)?

Martínez won his last three fights, but was knocked down in all of them, including the memorable last round of his fight with Mexico’s Julio César Chávez Jr. back in September, 2012, in which he nearly got knocked out. Instead of running or clinching, he stood up and closed the show, but his last bout in Argentina against England’s Martin Murray was a disappointment—fighting through injuries he carried from the Chávez fight, he won, but many think he’s not as sharp as he used to be.

Martínez, who’s participating in Festival People en Español, spoke with the Current about all this, including the big question: what’s an Argentine who kicked a Mexican’s ass doing in San Antonio?

Do you feel you have a lot to prove again, as in the second Paul Williams fight [Martínez scored a second-round Knockout of the Year in 2010]?

More than anything, I have things to prove to myself. I’m not happy with the Argentina fight, I’d feel better if my body had responded better. What I want to do is fix my body 100 percent and be like I was before. My body just couldn’t take it anymore. So now I want to prove things to myself and continue achieving things.

How many fights do you have left in you?

I have two more fights with HBO Sports, so it’s a matter of deciding whom to fight. That TV issue is very delicate. You have HBO Sports on one side and Showtime on the other. If I want to fight [Mexico’s] Canelo [Álvarez] or Mayweather, it’ll be difficult because they belong to Showtime and I’m with HBO. So the first thing is that my team finds fighters we can put on TV. But they must be first-class champions. Otherwise, I wouldn’t be as motivated, and that’s very important for me.

How’s the left hand you broke?

The hand is fine, it was the area that suffered the least. It was just a bone that was fractured. The shoulder and the knee were more complex. I haven’t trained since my last fight, and won’t fight until next year, when I’m all healed.

A good [fight] option, and the future best middleweight champion.

A very great project. I hope he doesn’t fade away if he loses against Mayweather [on September 14].

The best pound-for-pound boxer in the last 10 years, easily.

I have a very strange relationship with Mexican fans: I’ve never met a Chávez Jr. fan, even though I travel to [Mexico City] very often. But, really, everyone in Mexico always greets me wonderfully. If I see [seven-time, four-division champion Juan Manuel] Márquez [currently ranked as number three pound-for-pound boxer by The Ring], for example, or with [Antonio] Margarito, or any other boxer, we see each other as equal. We’re all professional and we do the same job. But I love Mexican people and they treat me excellently.

I still believe that, in your division, you’re unbeatable as long as you fight with two arms and stand on two legs. So, how fit will you be in 2014?

Please read the complete Q & A and watch videos of Martínez fights here.