Bracken Bat Cave Would Save More Than Bats 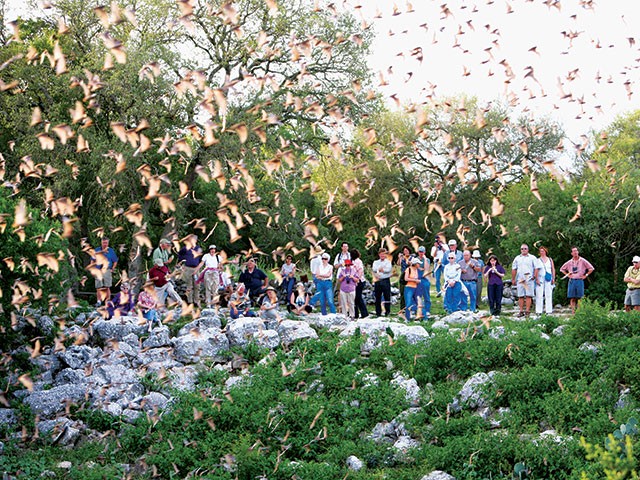 A deal to purchase more than 1,500 acres of land near the famed Bracken Bat Cave could benefit an endangered bird, seven other species and Texas wild-rice, in addition to preserving the seasonal home for millions of bats.

San Antonio City Council will vote Thursday on the $20.5-million deal between the Nature Conservancy, Bat Conservation International, Forestar Real Estate Group L.L.C. and the City of San Antonio for the 1,521-acre Crescent Hills in Comal County, near the Bracken Bat Cave.

If the plan is approved, Bat Conservation International and the Nature Conservancy would own and manage the land and San Antonio would secure an Edwards Aquifer Conservation easement on the property. Forestar, an Austin-based land, mineral and fiber-resource outfit will get credits allowing it to build and sell denser developments on other property outside of the tract.

District 8 Councilman Ron Nirenberg, who spearheaded the public-private partnership, said owner Galo Properties has agreed to the sale. Galo had planned a 2,500-home subdivision on the land, which sits smack in the middle of the Mexican free-tailed bat’s flight path.

Bat Conservation International spokeswoman Amy Price said the Bracken Bat Cave’s 15 million seasonal residents make it the largest bat colony in the world. And the colony is maternal, making it even more special.

“This is very significant for this species. They come up from Mexico in April and come into the maternity colony to give birth to pups,” Price said. “They have one pup a year and mortality is high for baby bats, even Texas baby bats. They have to survive the drought. Mothers leave for water and food and come back and nurse pups. … When it’s really dry there are problems.”

The subdivision would have been constructed in the middle of a flight path that leads to agricultural areas south of San Antonio, where the bats work pest control, increasing challenges the bats already face in the harsh South Texas climate.

“We don’t want to take nature’s pest controllers off of the landscape because the endgame is much worse than we lost a species or you can’t see the largest bat colony,” Price said. Without the bats, Price explains, farmers would need to use more pesticides. And placing families so close to such a large bat colony would not end well, Price explained. For instance, children playing in the area could get bit, leading to a rabies scare or teenagers could enter the cave to smoke cigarettes and drink, Price said, adding that a lit cigarette butt could cause all the guano to ignite and burn for a long time.

But there’s more to those hills than the Mexican free-tailed bat. The 1,521-acre tract is home to the Golden-cheeked Warbler, which has been listed as an endangered species since December 1990. The Comal County land sits in the warbler’s Central Texas breeding grounds, too. The tiny bird likes to breed in juniper-oak woodlands, according to the birding website birdlife.org, which have been depleted by development, ranching and agriculture.

Counting warblers in the wild and estimating how many birds the habitat can support is incredibly difficult. But the good folks over at Texas A&M Institute of Renewable Natural Resources conducted a study in 2012 that estimated 4 million acres of potential habitat in 40 Central Texas counties could support 262,000 male warblers.

Dr. Heather Mathewson, lead author of the paper, told the Texas Water Resources Institute that the bird was designated as endangered because of small populations coupled with loss and fragmentation of its habitat.

“Those estimates—some now over 20 years old—were often based on a limited amount of data from only a handful of study areas in the breeding range,” Mathewson told the organization. “Depending on the data and analyses, estimates varied from roughly 9,000 to 54,000 individuals.”

But even if the warbler’s numbers have increased, Mathewson told the Texas Water Resources Institute that the study doesn’t recommend taking the Golden-cheeked Warbler off of the federally endangered species list.

Environmentalists and conservationists aren’t the only groups interested in protecting the bird’s habitat: The United States Army contributed $100,000 to the deal. In 2008, Greg Harman wrote a story for the Current about the stress and conflict between development and the fragile state of the Golden-cheeked Warbler, which explained the origins of protection efforts in this area.

“The warblers are endangered, and so they must be protected and as development increases in the area, warblers are impacting the Camp Bullis mission,” Nirenberg said. “So we protect areas around it so that the birds don’t end up on the mission site.”

According to the Department of Defense’s Readiness and Environmental Protection Integration website, working with San Antonio and other conservationists protects the army’s live-fire artillery drills and its ground vehicle training exercises, along with mitigating noise concerns and improving operational safety. So instead of artillery blasts, hopefully neighbors will hear the Golden-cheeked Warbler.

Seven other species and Texas wild-rice, nearly all of which are endangered, will also benefit from the deal. The land will remain undeveloped, which means chemicals and other pollutants that accompany traffic and subdivisions won’t be running downstream, protecting habitat for the Comal Springs riffle beetle, the Comal Springs dryopid beetle, the fountain darter, Peck’s cave amphipod, San Marcos gambusia, Texas wild-rice and the Texas blind salamander. The San Marcos salamander, which is a threatened species, will also benefit.

“This land has direct flow to the [Comal] springs, one of our most sensitive areas, so the opportunity to protect this piece of land is extremely important to the vitality of our water system and water flows, but also to the rest of the downstream communities of the Edwards Aquifer,” Nirenberg said, a point Price echoed.